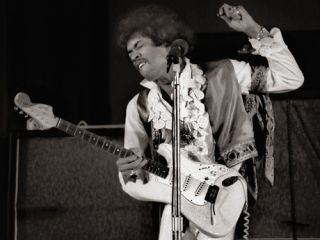 Welcome to part two of our special feature showing you how to dramatically increase your rock soloing potential, and boost your fingerboard knowledge at the same time. If it's your first time here, please check out part one for background information and the first 10 licks. If you've already mastered part one, let's go...

If Eric Clapton and Buddy Guy were to collaborate and create the mother of all area two licks, this is what we think they'd come up with.

The essence of three guitar gods within three bars! In bar 2 we have Jimi's take on area two, in bar 3 we make the shift toward Steve Lukather, and finally in bar 4 we see how Jimmy Page, Dave Gilmour and Joe Walsh might incorporate some Albert King bending.

Gary Moore is the inspiration behind this repetitive cyclic idea, based entirely on the minor pentatonic. Notice how in the sped-up version we're replacing.

The abundance of tone gaps on the high strings is exploited fully in this slippery example. Ensure that the three-fret slide in bar 2 gets to pitch accurately.

This triplet-based example is again derived from a sequence of three, although this time it alternates between descending and ascending notes. Pull-off s and hammer-ons are used whenever possible to achieve a smooth 'legato' sound.

And here is the ascending version of the same idea. You can loop this alternating sequence of ascending and descending threes at any point in the sequence.

We begin with a rhythmically displaced minor triad. Later in bar 1 the 5th of the triad is flattened for a more sinister sound. Then we exploit the sophisticated minor-add2 arpeggio (R 2 b3 5), but the bends stop things from sounding clinical.

Jimi Hendrix meets Steve Cropper with this double-stop idea, initially based around the perfect fourths that are found on the first three strings within this area. As the lick progresses we get more scalar, adding the sweet sounding 2nd/9th into the mix.

When approaching the A minor scale (A B C D E F G), all of the open strings are available to us as they correspond to notes found within the scale. This Gary Moore-inspired phrase showcases this concept perfectly.

There are two pathways through the minor pentatonic scale that traverse the fingerboard using nothing but tone gaps and slides. This is the first of these pathways, and is a highly effective device to cover ground in a logical and highly musical way.