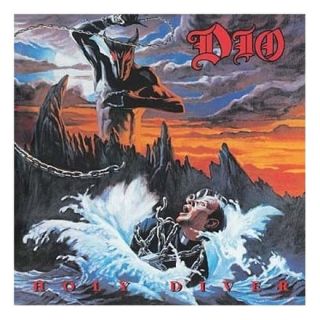 Like many of you, we were disappointed to hear that Heaven And Hell - the supergroup featuring Tony Iommi, Geezer Butler, Vinny Appice and Ronnie James Dio - have had to cancel their European shows due to the singer's illness.

Of course we wish Dio all the best in his recovery, but until he's back tearing it up onstage, we'll have to make do with putting his masterwork on the office jukebox again…

When vocal powerhouse Dio formed his own band following successful runs with both Rainbow and Black Sabbath, few would have expected lightning to strike so strongly a third time. But it did - Holy Diver stands as one of the greatest metal albums ever recorded, with its nine titanic wedges of melodic metal that owe a huge debt to Vivian Campbell's inspirational guitar playing.

He was a relative unknown in Belfast's Sweet Savage when he was handpicked by Dio after Jake E Lee's departure from the fledgling band.

A canny choice indeed, the 19-year-old Irishman's impressive pallet of techniques and raw passion for his playing shines through from the full-on opener Stand Up And Shout, the riffmonster title track, the upbeat melodicism of Gypsy and Caught In The Middle (both of which the guitarist has co-writing credits on) to the flawless moody dynamics of Don't Talk To Strangers.

It's debatable whether Campbell - now with Def Leppard - or even Dio himself - ever soared to such creative heights again.

Campbell told Guitarist his own feelings upon revisiting the album himself: "I never appreciated what I did as a guitar player - I realised that actually it was alright. At the time I thought it was shite. I just wanted to play faster and faster. Apparently it's been influential but I didn't appreciated that until a couple of years ago. There was a lot of anger in my playing, and for good reason."

And he also told us how he came to own his iconic cherished, "bastardised" Les Paul, which he used to record the album:

"It wasn't like today where you go to a guitar centre and they've got 3,000 to choose from - I had to wait for months and months [to see a Les Paul]. I'd go in every day and ask, Any sign yet?

"One day I went in and they said, Good news and bad news - we have a Les Paul Standard but it's not gold. I was impatient so I said I'd take it - it was a wine red deluxe Les Paul with the little mini 'buckers in it. I thought that was pretty cool because Scott Gorham had a sunburst version as one of his main guitars. So I took that and immediately set about bastardising it.

"The first thing I did was take emery paper and rub the finish down because Rory [Gallagher] was my guy back in the day, I don't like the newness. To this day I still tell Wolfie, my tech, Don't clean it up if I bang into it with my belt buckle, that's fine.

"I changed everything on that guitar - I changed the mini humbuckers out and put a DiMarzio in the bridge, I refretted it, painted it matte black after a couple of years and put Schaller machine heads and a brass nut on it.

"That was the guitar I went on to use with Dio on the Holy Diver record. I still have that guitar and it's the only guitar I know the serial number of: 72987537.

"It's not a great guitar compared to the Les Pauls I have nowadays - the neck's really thin, I play much thicker necks now. But a lot of notes have been played on that guitar - a lot of solos. I always remember the Holy Diver album and tour was on that guitar - and most of Last In Line too."