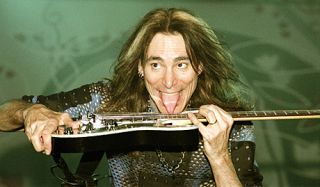 Vai releases a selection of musical musings under the brand VaiTunes...

On Steve's official site, he explains the concept behind VaiTunes. Here's part of what he had to say on his thinking behind the concept:

"It's not uncommon for a musician to record more work than they release. In my case I have a digital ocean of snippets in various degrees of completion. Some are leftovers from assorted project recording sessions, projects that were never completed, sound check jams, demo snippets, etc.

"These tracks may be specific to a particular project that has never had the chance to be a completed big picture, but now, with the advent of all this digital technology and distribution, it's possible to release a variety of tracks from a potential project without having to complete the whole project itself.

"Eventually, if there is enough tracks completed that fall into a precise endeavour, perhaps they will be compiled and released as a cohesive CD. In any event, it's a good way to release a constant stream of music."

VaiTunes are available from all major digital music retailers and you can download the pdf of the sleeve notes from Vai.com.

The second offering from VaiTunes - The Moon And I - is available now.