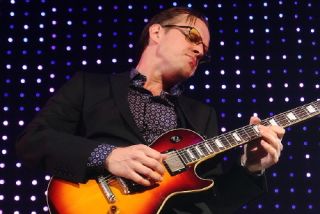 Guitarist Live: We caught Joe Bonamassa's Bristol Colston Hall show and were blown away by two hours of non-stop guitar fire and finesse...

There's so much guitar playing packed into his show that blues-rock guitar star Joe Bonamassa even tosses out a blistering solo as he walks onstage. And for the next two hours straight - with no intermission, and with barely a breath between songs - the capacity crowd packed into Bristol's Colston Hall on Thursday night was treated to nothing short of a masterclass in showmanship and guitar mastery.

Joe announced that the last time he played the venue he was feeling out of sorts, and determined to make amends: this much he did. Whether he's playing standard-tuning slide, fluid fast-picked pentatonic runs, expressive combination bends, thumb-and-fingers rhythm, single-note volume-swells, exotic scales or a combination of all of the above, it's impossible not to be impressed by his controlled intensity. In fact, it's hard to think of another guitarist besides Jeff Beck who has the quiet/loud dynamic so effortlessly at his command. Certainly there are few players who find the time to vary their sound so constantly mid-song, using the guitar's onboard controls, to such great effect.

Set-wise, alongside accepted classics from the Joe B canon (Steal Your Heart Away, Ballad Of John Henry, Mountain Time and a breathtaking rendition of Sloe Gin), new song Slow Train proved a good omen for the new studio album, with its clever band interaction, the one-two punch of its bluesey chord progression and a storming partial chord-based solo.

Gear-heads in attendance - and judging by the branded T-shirts, we reckon there were many - could drool over a selection of his by-now familiar Les Pauls, together with an Albert Lee and a Luke Music Man, an Explorer-style Ibanez Destroyer, a Flying V and at choice moments, a Moog Theremin through a delay pedal, all blazing through Joe's four-headed amp rig. Ironically though, his acoustic spot was the highlight from where we were sitting: as aggressive as it was musical, it received the loudest applause of the night with good reason.

"There are a lot of bands in this town competing for your guitar pound, so thanks very much for coming here tonight," was his valedictory salute - but he needn't have worried. The 2,000 or so punters at the sold-out show were too busy giving him a standing ovation to worry about value-for-money.