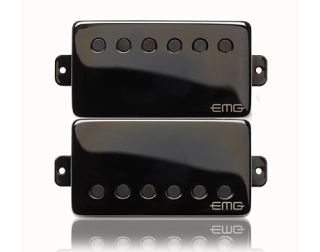 Here's the full release from EMG

"The JH Set is a totally new dimension for EMG with the design being driven solely with the input of James Hetfield. In early 2009 James Hetfield contacted EMG Pickups president Rob Turner and presented him with a challenge: to create a 'stealth' looking set that captures the clarity and punch of a passive pickup and still retains the legendary active tone that moulded a generation.

"Featuring sleek black nickel plated caps and EMG's Solderless Installation System components, the JH Set consists of the JH-N in the neck and the JH-B for the bridge position. Both pickups were patterned after the pickups James has used for 30 years but the end result was a completely different animal.

"The JH-N has individual ceramic poles and bobbins that feature a larger core and are taller than the 60. This produces more attack, higher output, and fuller low end in the neck position. The JH-B uses the same type of core but has steel pole pieces, unlike the 81 that uses bar magnets. This produces the familiar tight attack with less inductance for a cleaner low end."

We'll be reviewing both the HetSet and his new ESP SnakeByte guitar in a future issue of Guitarist.