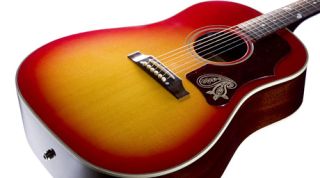 Brad Paisley is a huge star in the US, and he mixes accessible country styles with a technique that defies belief. He not only tops the American country charts but the official Billboard listings too, and he's now the proud benefactor of a new Gibson Signature J-45 acoustic.

Here's what Gibson have to say:

Regarded by many players and fans alike as the saviour of genuine country guitar picking and known for his fiery electric twang, Brad Paisley is also an unparalleled singer and songwriter whose acoustic moments are every bit as powerful as his amped-up excursions.

In celebration of his dedication to the instrument, and his achievements in his field, Gibson presents the Brad Paisley Model, a custom-appointed acoustic guitar from the luthiers of Bozeman, Montana. Constructed in the image of the beloved J-45 'round-shouldered' dreadnought with Paisley's own preferences for a prized solid Adirondack Red Spruce top, solid mahogany back and sides, and one-piece custom mahogany neck with a modified V profile and 24 ¾ -scale rosewood fingerboard, it's a sultry instrument on par with the best pre-War Gibson flat-tops, yet equipped as a top-flight performance machine for today's professional.

Click here to read the full release and watch a video in which Mr Paisley chats about his new acquisition.

Brad makes a super-rare visit to the UK with two shows at London's Shepherd's Bush Empire on 23rd - 24th June. We'll be there, and you should be too.

And here's why you should care about Brad Paisley? OK, so it's a little bit country, but it's also a little bit rock and roll and can the man play...!