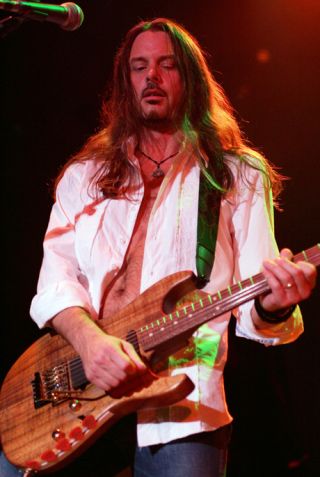 As we look forward to the imminent release of Forevermore, the brand new album from Whitesnake, join us as we delve back into the history of Reb Beach, the man who helps fellow 'Snake axeman Doug Aldrich provide the flurries of notes with which Old Cov™ continues to work his effervescent magic.

Reb made his name with Winger, a so-called hair-metal four-piece led by singer, bassist and walking bouffant Kip Winger who were ultimately snuffed out by the Rise Of Grunge after releasing three albums and touring the world.

As befits many rock players, he's rightly proud of the guitars he's used over the years. He was honoured with an Ibanez signature model, the RBM2NT Voyager that was released in 1991, but these days plies his trade with Suhr guitars. His main Whitesnake axes include one he bought in New York in 1986 and an exact replica that John Suhr made for him . And why not?

In the clip below, Reb is playing the flip-flop blue Kramer who takes the first solo. The guy with the red Ibanez is Paul Taylor, who left the band in the early nineties to be replaced by John Roth.

The song is entitled Seventeen and made it to number 26 in the Billboard Hot 100 in 1988. How things have changed ..sigh.

And here's Reb doing his stuff with Whitesnake...