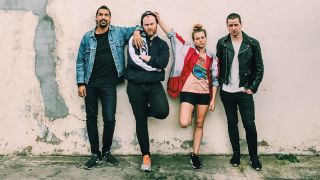 This month we dine out on IToldYouIWouldEatYou, Wheel, Pijn, Press Club, Beach Riot and Astronoid.

“I’ve always tried to take whatever negative stuff that happens and turn it into something; that’s my view of art,” explains guitarist Joe Clayton of the record’s concept. “But it was a topic that everyone around us had something to contribute to – and not just the musicians. We felt, ‘If we’re getting so much from it, then everyone could contribute to it.’”

As such, the band invited contributions from anyone experiencing grief, offering them the chance to share experiences and make something positive from their loss. “We had quite a difficult few weeks getting hit repeatedly day after day with the worst things people had been through,” admits Joe. “It felt like we’d bitten off more than we could chew.”

It was clear they’d tapped into something, not just from the volume of submissions, but also their diverse form: videos, written stories, Skype conversations… “We had a couple of harsh noises,” adds Joe. “Like distorted vocals over some really heavy synth things… we had to find a spot for that. Or we’d have these rhythmic speech parts that gave us these patterns, or drones that we made from layers of people talking.”

Loss is as ambitious and sincere as the subject demands. Deep, dark guitar and bass composites rise and fall around swirling cellos and echoes of speech samples. The result is like Russian Circles channelling Pink Floyd, but the process has helped them realise the universality of their personal experience.

“It’s easy to be self-absorbed with it and be like, ‘This is my experience,’” reflects Joe. “But there’s a bigger picture. There are millions of people going through the same thing. That was a healthy realisation for all of us.”

Lifelines (not deadlines) from down under

Australia’s Press Club have that wonderful combination of anthemic exuberance, desperation and punk vigour that powered the Replacements and, more latterly, Japandroids and Pup.

“I’m the single guitarist of the band,” says Greg Rietwyk. “So my approach to guitar playing is bridging the gap between [vocalist] Nat’s melody lines, and Iain and Frank’s chaotic rhythm section. My sound is completely fuzzedout, but with enough clarity to carry a melody.”

Listen to the likes of Headwreck and Suburbia and you’ll get a feel for the frantic, singalongs that pack out debut album Late Teens.

“I think if you write honest and real music, and record it that way then it seems to be able to connect with people on a personal level,” refl ects Greg. “Being able to talk to someone our music has connected with is a total spin-out to me. It’ll never get old.”

Forged in Finland by British frontman and guitarist James Lascelles, Wheel take a Tool-esque approach to progmetal, recalling a little of that disorientating vocal phrasing and thunderous percussion.

“I am often playing and singing in diff erent rhythms, which really takes some getting used to.” explains James. “There are some absolutely brutal examples of this on the upcoming album that are really pushing me to my limits.”

The band’s debut Moving Backwards tackles fears about the world’s anti-social direction. Lascelles cites Meshuggah and Karnivool as inspirations and that same rhythmic mastery is evident in his own band’s output. “Arrangement and structure is everything,” concludes James. “All of the best riffs and ideas I have ever heard are only as good as the context in which they are used.”