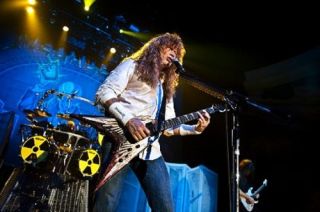 Riff masterpiece 'Hangar 18' is the standout track from Megadeth's classic 1990 album 'Rust In Peace'. Dave Mustaine gives us the lowdown on his blistering ode to UFOs and wee green men...
Interview: Ed Mitchell

It's all gone a bit 'twilight zone'

TG: 'Hangar 18' is bursting with monster riffs. What do you remember about writing the song?

"I wrote a lot of songs when I was really young. 'Rust In Peace...Polaris' was written before I was in my first band, Panic. So was 'Mechanix' ('Killing Is My Business... And Business Is Good!', 1985). 'Hangar 18' was just another one of those songs, although it was actually under a different title. These were songs that I took with me to that first band - didn't get a chance to get them out in my second band [Metallica] - but my third one [Megadeth] I did. So I'm really excited about you picking that song."

TG: How young are we talking here?

"I was about 16. I started playing guitar when I was 13. I was about 18 when I'd gotten into Panic. After that ran its course I moved onto Metallica. I think I was about 20 when that happened."

TG: The inspiration for the song obviously comes from Hangar 18 at UFO central, Area 51...

"Yeah. When I was a kid I was fascinated by airplanes and I'd seen this number on the side of a plane and it said 'N2RHQ.' At least that's what I thought it said and I went 'wow, N2RHQ... into our headquarters. How cool?' That was the germination that set 'Hangar 18' on its way."

Killing is my business...

TG: Chris Poland, who played on 'Killing Is My Business... And Business Is Good!', was brought in to record the demos for 'Rust In Peace'...

"Yeah, we had been practicing that record as a three-piece. So the record was written but we hadn't found a lead guitar player. We asked Chris to come into the studio and play on the demo tape. So I demoed it and Chris played a solo on it."

TG: How much influence did Chris have on what Marty Friedman played on the finished record?

"A lot of those solos became part of Marty's work. In so much that everyone thinks that Marty is really great, so was Chris. He was the one who laid the seeds down for some of those solos. I can hear it. I don't know if everyone is going to immediately hear it, but it's certainly there."

TG: Can you recall what gear did you use to record 'Hangar 18'?

"I used a Jackson guitar with Seymour Duncan pickups." [While Mustaine is best known as a Dean endorsee these days, at the time of recording 'Rust In Peace' he played a Jackson King V guitar with a fixed Kahler bridge and Seymour Duncan SH-4 Jeff Beck and SH-2N Jazz 'buckers at the bridge and neck respectively. Jackson produced the KV1 Dave Mustaine Signature guitar from 1996 to 2001).

TG: What about amplifiers?

"It was Marshall stuff. We did have VHT amps and Bogner preamps laying around, but I've always been a Marshall guy. I traded my motorcycle for a Marshall stack. I used to sell drugs... copious amounts... just to be able to buy Marshall gear."

TG: Why do you think 'Hangar 18' excites guitarists so much?

"Probably because the sections are so different. You can almost hear The Beatles influence and the Led Zeppelin influence at the front of the song. Then in the middle of the break when we go to the first extended solo section, it's a very Spanish 'jazzy' kind of part. Then the end solo, when the guitar duel takes over, it's no holds barred get the f*ck out of the way!"