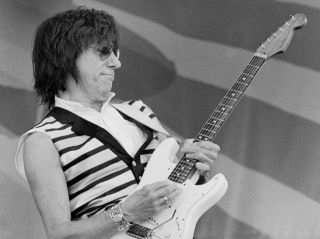 Legendary guitarist (Doctor) Jeff Beck has told BBC 6 Music that he would still love to play with the Rolling Stones at some point.

Speaking to Matt Everitt, Beck responded to the question "Would you join them on stage?" by saying:

"Yeah, I would. I've just put my foot well into it, but I would, it would have to be a blues [number], or something that could show what I can do. I love them, who doesn't? Even 'her highness' up front…"

Beck's clearly got The Stones on his mind, revealing earlier in the same interview that his one regret was not joining the band following Mick Taylor's departure in 1974.

"I wouldn't have had 'Blow By Blow', which has kept me as a solo artist… I'd have just been a member of the Rolling Stones. The biggest band in the world - how bad is that? If you can be someone on your own, then that temptation's there. I guess it's the ego thing - to have your own name on the ticket."

Jeff Beck is due to receive the Living Legend award at the upcoming Classic Rock Awards.