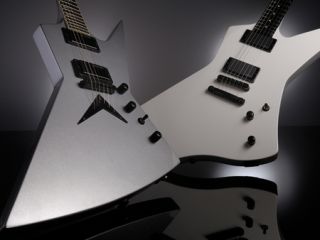 The country's just getting over a case of 'Big Four'-mania, thanks to the thrash gods' collective appearance at last weekend's Sonisphere festival. Yeup, Slayer, Anthrax, Megadeth and Metallica on the same stage was a sight to behold, but now it's time for them to put the self-congratulatory schmaltz to bed and get back to what they're best at - bitter rivalry!

As always, what affects music affects the guitar industry and the release of two remarkably similar signature models from LTD/James Hetfield and Dean/Dave Mustaine was too good to pass up.

Pick up Total Guitar issue 217 to read our Head To Head test and to see which of these mighty battle axes emerges victorious from our, err, mighty axe battle.

*Apologies for using the word 'frenemies'.