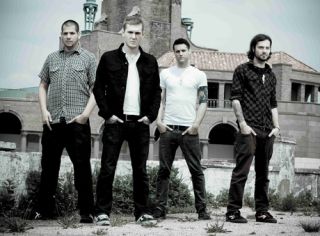 In our one-off Gaslight Anthem blog, we asked lead-man Alex Rosamilia to pick his top 5 guitarists. Considering their new album 'American Slang' debuted in the top 20 last week (and number 3 in the US), we think you might be surprised by some of his choices…

Check out Total Guitar issue 203 (on sale now) for a full interview with Alex and Brian.

"I only really got into Peter Green's Fleetwood Mac about a year ago, but I've totally fallen in love with it. His idea for melody is ridiculous. I'm not too sure what he sounds like these days, but his stuff with John Mayall and Fleetwood Mac will always be some next level stuff."

Song: 'Man of the World'

Dave Knudson (Minus The Bear/Botch)

"One of, if not the most, original guitar player of "my time" (whatever that means). Throughout Botch, and now in Minus the Bear I think he and his bands have always been one step ahead of the game. Minus the Bear just did it again with 'OMNI'. That record is sick."

Song: Anything by Botch or Minus the Bear. Literally anything.

"Not the most macho of guitar heroes, I know, but the guy is a genius. I think he approaches the guitar in a totally different way than most do. His melodies are all very linear, and it was his guitar work that I used to get most (and still get some) of my inspiration from."

"Another band I didn't get into until later in their career, I think most of their stuff is amazing. Doug Martsch has a way with being droney without being boring. Which is a really fine line to walk across, and usually one only reserved for bands like Sunn o))) or Merzbow. He pulls it off and manages to do it in a poppier fashion. (Note: That was in no way a diss to Sunn o))) or Merzbow. I love bands like that.)"

Song: 'Goin' Against Your Mind'

"I tried not to be cliché with the guitarists I picked, but I mean, come on... He was the guy that made me want to play guitar in a band. And when I first started learning, he was the guy that I set myself to be as good as. Good luck with that one, right? There's just something about the way he can go in and out of so many different styles. I guess it comes from his days as a studio musician."

Like we said, check out TG203 (on sale now - more about that here) for a full interview in which Brian and Alex discuss their new love of Gibsons and 'American Slang's British blues influence...