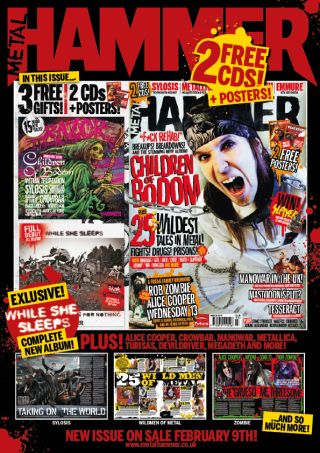 Children Of Bodom lead guitarist and shredder extraordinaire, Alexi Laiho, is on the cover of the new issue of TG's sister mag 'Metal Hammer', which goes on sale today (9 February).

Alexi, who features in TG's greatest metal guitarist poll, talks to 'Hammer' about the band's latest album, 'Relentless Reckless Forever', and living up to his rock star title. In keeping with the theme, 'Metal Hammer' also takes a look at 25 other wild men of rock, including Ozzy Osbourne, Lemmy and Mötley Crüe.

The mag also has a round table discussion on the future of shock rock, featuring the some of the biggest and best names in the genre - Alice Cooper, Rob Zombie and Wednesday 13.

The second CD is the entire debut album from While She Sleeps, 'The North Stands For Nothing' who will play the 'Metal Hammer' Razor Tour this month with Sylosis, Bleed From Within and Anterior.

'Metal Hammer' is available on newsstands now. Also, keep an eye out for the forthcoming Total Guitar 212 (on sale 18 February to 17 March) for a guitar-focused Alexi Laiho feature, in which he tells us how Randy Rhoads and his new signature ESP shaped the album's sound.