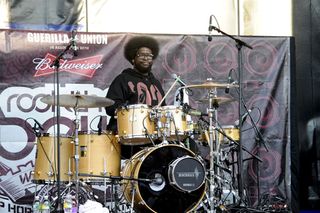 Tracks by Marvin Gaye, Roberta Flack and Nina Simone are among those on the album.

?uestlove told Rolling Stone: "People tend to frown on the cover album. So, I wanted to choose cover songs that were so under the radar, so uniquely interpreted, that it would take you a second to realise that these are cover songs".

This is one album we're definitely looking forward to hearing. In the meantime, check out this awesome ?uestlove solo. Nice.