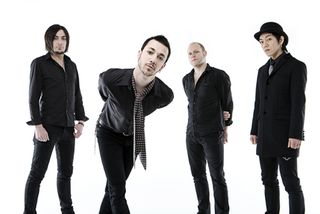 Not only is Jason Bowld an awesome drummer and part of Rhythm's team of tuition experts, he's also a highly in-demand sticksman and a watertight rock player. One listen to his latest project Slaves To Gravity's first single shows you exactly why he is so sought-after.

'Good Advice' is a fist pumpin' slab of attitude-soaked hard rock anchored by hard and heavy playing from Jase. Even better, it's available as a free download from the band's website. We caught up with Jase to get the lowdown on how he linked up with the Slaves to Gravity, the decision to offer their single for free and the band's monsterous sound.

How did you become involved with Slaves to Gravity?

"I got involved with the band after their last drummer went AWOL! Basically, they had not long recruited her after their long-term drummer (also called Jason) had to leave through personal problems. It's the usual way I get involved with bands really - word of mouth with no big nosed agent in the way waiting for their cut!"

How does the gig differ from your previous projects?

"The band sound certainly sounds BIG. Everything's to a click which really gives us that control. I think when a lot of bands play live without a click everything's ten times faster. This is cool if you're in the front three rows, but after thatit sounds like a mess. Also because the tempos are quite controlled, I can make use of the 'space' in the grooves to project my sound more - this band is about being BIG!"

Why did you decide to go with a free download?

How is the rest of the year looking for you guys?

"Summer's quiet - at the moment it's all about laying the foundation blocks for the autumn and next year with the new album Underwaterouterspace. We've got Sonisphere on August 1st and touring in the autumn til whenever the album burns out.

'Good Advice' is available now. Register for your free download at www.slavestogravity.com. To check out Jase's latest video lesson pick up the latest issue of Rhythm.