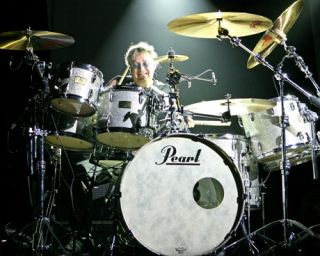 Deep Purple's iconic Machine Head album turns 40 this year, and to celebrate we sat down with Ian Paice to talk about the recording of the masterpiece.

You can read the full interview in the Summer issue of Rhythm, but here's an excerpt for you, as Ian recalls laying down an all-time rock classic.

"The first track we laid down - and the last to be finished - was 'Smoke On The Water', before we knew what it was going to be called," he tells us. "That was done in the ballroom of the Grand Hotel in Montreux, right by the lake. There was no sound-proofing and we were recording at night, a hell of a racket! We just got the track down before the cops broke in - we had the roadies holding the door shut with them pounding on the door!

"The obvious memory is of the chaos when the Casino burned down. To précis, we were to record in the Casino which was closing for the winter. The last concert [4 December] was Frank Zappa and we went along to see the show and some guy took a flare gun into a place that was decked out like a Polynesian island with artificial palm trees and coconuts! He decided to shoot it into the ceiling which went up like a perfectly built bonfire.

"Zappa was magnificent - he said nobody panic and then jumped through the window behind him! Within minutes it was an inferno, flames hundreds of feet in the air. Back at the hotel Roger [Glover] and Ian [Gillan] saw this pall of smoke drifting across Lake Geneva and I think it was Roger who said 'Smoke on the water'. So the title came first, Ian wrote it down and by the time it was finished it was the last track."

For more pick up the Summer issue of Rhythm at your local newsagent, online or on Apple Newsstand.