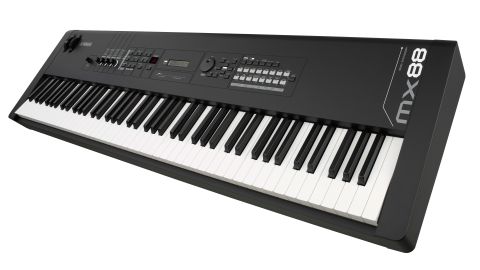 A solid and versatile machine, the 88-note keybed and USB class-compliancy add to MX88's already wide appeal. It's reasonably priced, well-built, portable and sounds good, making it great board for beginners and pro's alike.

Following on from the Montage, it was only a matter of time before Yamaha paid some TLC to its lower-entry products. The MX range is already popular and adding an 88-note weighted version is great news for those wanting to extract the most from its piano and electric piano sounds.

Weighing approximately 15kg, the MX88 is very portable for an 88-note weighted board. Its build quality is pretty solid, but like the rest of the MX range, the case is lightweight plastic, so anyone wishing to gig with the ’88 will likely want to grab a flight case if they can deal with the extra weight. The dials and switches feel solid and Yamaha ’boards are usually very sturdy long-term – a plus for durability.

Most importantly, the GHS keybed feels very nice to play, surprisingly not much different to the flagship Montage weighted keybed, and it's pretty well balanced, though the key return is a little sluggish for playing faster material such as synth leads or percussive sounds.

Control-wise, the ’88 is the same as Yamaha's previous MX49 and MX61models. There are the company's familiar hard plastic pitchbend and mod wheels, four multifunction knobs, a data wheel and plenty of buttons for selecting functions, plus foot control and sustain pedal inputs.

The four knobs access different functions according to the ‘knob function’ button (including filter cutoff/resonance, part volume, panning, envelopes and FX send levels) and are also used for DAW functions when the MX88 is in ‘DAW Remote’ mode. These controllers are perfect for making real-time tweaks while playing live or in the studio.

Display-wise, there’s an 'old-school' red-on-black three-digit display showing the performance number (a performance is a 16-part multitimbral setup), plus a backlit dual-line screen for displaying voice names and for editing tasks.

The MX88 is very intuitive to use, and it's childsplay to set up 16 different sounds and flick through them with the left/right cursor keys or part buttons while performing, without having to menu dive.

There’s also no audible cutoff when switching sounds, which really helps in live situations. To alter sounds in real time, simply reach for any of the four knobs and tweak the filter, envelopes or FX levels.

The 16 Category Select buttons simplify choosing from the 1,106 voices and 61 drum kits onboard (there's additional space for 128 user-writeable voices), and categories include piano, keyboard, organ, guitar, bass, strings, synth lead, synth comp, sound FX, ethnic and more. Splitting and layering these sounds is very easy: simply hit the Layer button to layer parts 1 and 2, or hit Split to send part 1 to the left and 2 to the right of the user definable split point.

The MX88’s 128-note polyphonic sound engine is based on the Motif XS' waveform and preset library, and there are many sounds I recognise immediately from right back to the original Motif and even the EX5 or EX7, though many (in particular the organs, synth basses/leads) sound a little dated and compared to the Motif and Montage sounds – there’s not as much in the way of real-time performance control, (or as powerful an FX section), so the sounds aren’t quite as vibrant and authentic.

The overall sound quality is solid though, despite some stepping when using the filter at high resonance levels, and all the sounds will fit nicely into a mix in any style of music, from electronic to classical. There are many decent acoustic and electric pianos on board, and also some quality synth pads, plus some surprisingly nice acoustic drum kits, solo/ensemble strings, ethnic instruments, percussion sounds and sound FX.

Downsides include the onboard tonewheel organs, which lack a real sense of authenticity and no drawbar controls, whilst the clavs lack the excellent Reface CP's authenticity. Also, while there are some lovely strings onboard, excessive sampled vibrato makes some of them less versatile.

The MX88's sound editing is basic – you can’t change the filter type, or edit the voices at Element level, but there's a third-party Performance editor available (http://vycromx.com) for those who want to dive deeper.

Thankfully, the MX does include editable filter and amp envelopes plus an LFO, panning, mono/poly modes and portamento, and as the MX range is now fully USB 'class compliant', you can take advantage of the great FM Essential iOS App and directly control its functionality from the MX's front panel using Apple's Camera Connection Kit.

The VCM effects are great, offering a global reverb block and a separate chorus block, along with a very good range of quality insert effects including delays, phasers, distortions and lots more besides, of which you can choose four per performance.

In addition, there’s a built-in 999-preset arpeggiator that can be applied to up to two parts in a performance simultaneously. It's MIDI-syncable and its output note information can be sent to your DAW for use elsewhere.

Also, let’s not forget the Rhythm Pattern mode, which gives you access to 208 patterns to jam over. Although you can’t record your own patterns, you can play WAV files directly from a USB stick, and save settings too. There's also a mono auxiliary input for routing your own music player through.

All things considered, the MX88 is a great no-nonsense bread-and-butter ’board with some great sounds and very handy features. It will particularly appeal to those after their first serious studio or live weighted-action board, and it covers a lot of ground very competently.