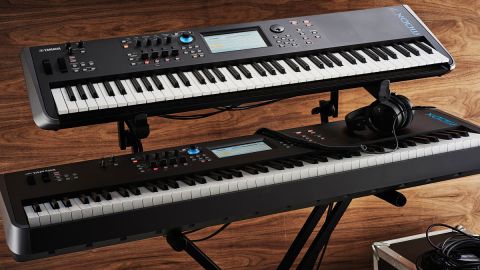 Essentially the MODX combines the best bits of the Montage/Motif/DX engines, for a great price! Hard to argue with!

Much like Korg with its Kross and Krome, Yamaha’s flagship Montage engine (which features its AWM2 and FM-X tech) has now trickled down to its brand new MODX range, replacing the MOX range in the process.

Firstly let’s take a quick look at the form factors. The 88-note weighted action GHS (Graded Hammer Standard) MODX8 weighs 13.8 KG (a notch over 30lbs) and is aimed at those wanting to get the most from piano and electric piano sounds, or to use as a weighted controller. Yamaha describes this action as “great for the aspiring pianist, because it can help you build proper finger technique.”

This description is spot-on as it does test out your fingers, arms and wrists (even for someone like me, who has 35 years of piano technique) and also the bounce-back is quite sluggish for fast note repeats. We’d have liked a more authentic and better-balanced weighted action, especially as the slow response impacts on playing fast piano lines and synth stuff too. In contrast, the 76-note action feels light and very fast to play, though some will find it too light for accurate piano playing (ironically, we preferred playing piano via this action to the GHS keybed). One other downside to all the MODX actions is no aftertouch - as we’ve said many times to manufacturers, we don’t think aftertouch should ever be lost, especially for a board as deep in the synth department as the MODX!

Build and looks-wise there’s no mistaking the Montage heritage and the MODX7 is a ridiculously light, gigging musicians’ dream machine, at just 7.4kg. Importantly, the switchgear and knobs feel tough and the case (though lightweight textured plastic) feels like it could withstand some fairly heavy use. The overall look is clean and utilitarian, yet with many of the Montage’s buttons, knobs and sliders disappearing (to hit the low price point), there’s a lot more unused front panel space for placing a laptop, drum machine, smaller keyboard or iPad, which is handy!

Talking of lost controls, the MODX has lost the Montage’s eight rubberised knobs with LED ring dials and now has four multi-function knobs, two assignable buttons and four plastic-capped multi-function faders instead of eight (this time with no LED meters) which can be assigned to various duties including (among others) part/element volume levels, organ drawbars and scenes (which are snapshots of performance control data for quickly changing up your sounds). The soft feel pitch/mod wheels from the Montage have also made way for the harder plastic type found on the MOX and older Yamaha boards; for compactness, they are now placed above the keyboard, instead of to the side.

Like the Montage, the heart of the MODX programming system is the same full-colour, 7” touch-screen and data wheel/cursors, though you still can’t use the real-time controls during the editing process which would speed things up considerably. Also, as the MODX has lost many of the Montage’s direct parameter access buttons, there is a greater reliance on the screen for deeper programming. Regardless, the screen feels largely responsive and the OS feels almost identical to the much more expensive Montage, showing just how much power has been packed in.

Furthermore (compared to the Montage), the ash ROM is slightly smaller for samples (and sample rate is down from 192kHz to max 44.1kHz), FM-X polyphony has been halved (from 128 to 64 notes), the Pure Analogue Circuit (post DAC circuitry) has gone (and we’d say a little clarity/air and richness has been lost as a result), the outputs are unbalanced versus balanced and there’s no ribbon controller. It’s actually brilliant that Yamaha have managed to retained so much for the price though.

Like the Montage, the MODX range features a powerful arpeggiator with 10,000+ presets. It can be used as a backing tool or to spice up sounds, adding articulation on acoustic guitar patches, producing accent arps with variation available via the realtime knobs, or for creating beats, phrases and riffs. Also, the Motion Sequencer creates multiple, simultaneous stepped or smooth transition-based mod sequences that you can use to evolve sounds over time. There are also several motion lanes (tracks) that can be sent to myriad destinations to transform a simple sound into something otherworldly! It’s a complex system (and you’ll need the manual) but once you work it out it, it really brings sounds to life. Then there’s a wealth of versatile effects onboard including variation effects, two inserts blocks, plus master and A/D effects including phasers and modulation effects, reverbs, delays, amp modelling, an external audio sidechain feature, powerful filters and more off-the-wall effects too. The routing is very exible and the quality superb throughout. Finally, you can store eight scenes (panel setting snapshots) to capture and evolve your performances in real time.

The Montage’s ‘superknob’ is also included here and serves as a central ‘macro’ knob which can be assigned to control a staggering array of simultaneous parameters manually, or via the ‘motion control’ function, which allows automation of the knob via motion sequences (or over MIDI). The knob itself glows different user-definable colours, flashing with the overall tempo (optional). It can also be controlled via foot pedal for hands-off control over many parameters simultaneously; you could morph from one sound into another, fade in an FM-X layer over an AWM2 layer, control several layers’ volumes or filters or effect levels/parameters, and just like the Montage, the MODX’s control/sound-design possibilities are incredibly deep - it really does feel quite uncannily like the Montage!

Talking of which, this almost boundless possibility and programming depth still brings inevitable head-scratching at times and it sometimes feel overwhelming, even for well-seasoned programming nerds! We also wish the controller assignment system was faster and more intuitive and even though the Montage’s quick control assign feature (added in OS v2.0) is included, it’s odd that you can’t simply press the control assign button (at any time), turn any controller, then choose a parameter - this is how it should work! Also, note that controller assignments are made on a common/overall level and at part level where the real-time controls are available for each of the 16 parts and more besides; it’s essentially a super- complex digital modular and thus, you will need to spend time learning the OS and setting up patches and controller assignments before gigs. Once again, be sure to read the well-written manuals thoroughly!

Again like the Montage, there are three main levels for sounds; Performance, Part and Element. A Performance contains up to 16 MIDI parts that can be mixed/panned/ layered/split (and more). A part contains up to eight elements (ie waveforms/oscillators) in AWM2 mode, (or eight operators in FM-X mode) and both types of engine can be mixed/layered/split, (though unlike my SY77 there’s no RCM synthesis, so no way to use AWM2 or user- created waveforms as modulators within FM sounds).

Thankfully, making Performances is simple and adding a layer(s) to a Performance on the y is as simple as clicking the ‘+’ button on a blank channel strip(s), category searching your sound on screen and using the part faders for levelling. You can also import your own 44/48kHz WAV samples from a USB stick into the onboard Flash ROM (retained at power down) and use these as you would any other element (note: the MODX is backwards compatible with Motif XF AWM2 voices and DX/TX patches too). You can also drop performances into ‘live sets’ for easy/direct selection and the ‘category search’ function makes it easy to put performances and live sets together quickly.

Once you’ve set up your live sets/ tweaked your performances how does the MODX perform? Well, it impresses sonically (and is a huge step up from the MOX) but there are caveats. Firstly, there’s still no dedicated ‘clonewheel’ engine.

Although there’s a tweakable rotary-effect and some good B3 emulations onboard, if you want the faders to operate as drawbars you have to set them up manually. Secondly, while AWM2 still delivers, the analogue sounds could be more authentic and there’s still no dedicated virtual analogue engine (as found in the Reface CS). Thirdly, we’d still love the ‘spectral component modelling’ sounds/engine from the Reface CP and CP4/5 to be included, as they have some killer EPs, clavs and Wurlis onboard that often surpass the ones onboard here. And finally - there’s still no direct sampling or detailed multi-track sequencing, just a bare-bones 16-track ‘recorder’ with basic editing.

Regardless, it’s hard not to gas for the MODX, given the price, features and sound. The overall sound is clean and bright with decent definition. Yamaha’s acoustic sounds are great and the CFX/Bösendorfer Grands sound great; the breadth of sonic territory covered is vast. The EP ‘gallery’ performances/scenes are authentic, while the acoustic guitars, strings, brass and woodwinds are quality too. The FM-X engine (with eight operators, 88 algorithms, feedback, ‘spectral skirt’ and access to the 18 filter types onboard) is scarily comprehensive and versatile. Add in Motion Control for evolving sounds, the excellent effects engines, A/D input and envelope follower (with sidechain), a 5 stereo out/2 stereo in audio/MIDI USB interface, the portability and low price and really, the MODX is a very attractive purchase for a lot of musicians.