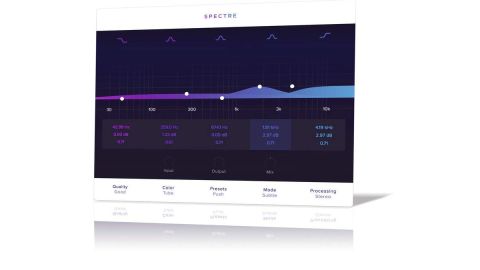 An inventive take on the harmonic enhancer concept that works wonders and won’t break the bank.

The second plugin effect from Jesús Ginard (following the Trackspacer sidechain EQ), Spectre combines an enhancer with a parametric EQ to facilitate the targeted application of harmonic distortion to specific frequency ranges.

It’s intended to be deployed like an EQ - albeit a parallel one - but yielding rather more particular, transformative results.

With its understated horizontal pink-to-blue colour shift, Spectre is quite a looker, but we’ve absolutely no idea what the idea is behind the optional big background (a very thick border, essentially) around the whole thing, which looks really weird. We can’t imagine anyone not turning off immediately.

To put the plugin (VST/AU/AAX) to work, you select one of eight distortion algorithms (see Ghosts in the machine), then manipulate the five-band EQ in the usual way, dragging nodes around in the display to set frequencies and gains, and scrolling the mouse wheel to broaden and narrow the Q factor.

Comprising high and low shelves, and three peaking filters, the EQ actually applies the chosen flavour of saturation to each band at the specified gain, as well as adjusting their volume levels. Specifically, the difference between the dry and EQed signals (the coloured area under the frequency response curve) is distorted, generating new harmonics that aren’t actually present in the source - ie, enhancement - rather than just making what’s already there louder.

Ghosts in the machine

The Color menu is home to eight saturation algorithms, plus the Clean setting, for unsaturated parallel boosting EQ.

Tube and Warm Tube are your versatile, ‘make almost anything better’ valve options, the latter the darker and more bass-orientated of the two, and both emanating plenty of heat when driven hard.

The Solid algorithm emulates the crunchier sound of transistor-generated distortion, while Tape pulls off a great impression of said electromagnetic medium, doing amazing things at the bottom end; and strange, potentially-artistic things at the top when overdriven.

Class B emulates a crossover distortion amplifier, heavily emphasising transients; and Diode is like a more controlled, high- frequency-responsive tube.

Finally, Digital is a deliciously evil hard clipper, and Bit is a fairly understated but surprisingly effective bitcrusher.

Since harmonic distortion can be added to a signal but not removed from it, it’s a boost-only design, with up to +12dB of gain on tap for each band.

The Mode menu offers an increasingly intense choice of Subtle, Medium or Aggressive saturation, and up to +/-12dB of input drive can be dialled in beyond that to push the algorithm further or pull it back. The summed bands are blended with the dry signal at the output using the dry/wet Mix control, which is set to the 50/50 centre point by default.

The Processing menu houses a choice of channel configurations: Stereo, Left, Right, Mid and Side. Yes, that means you have to use two instances of the plugin for mid-side processing - clearly an integrated dual-channel architecture would be preferable, but it’s not a deal-breaker by any means. Oversampling is also adjustable through the Quality menu, with 0x (Normal), 8x (Medium) and 16x (Best) options onboard, and a low enough CPU hit introduced by the last to make it a viable default.

Spectre is a novel, well conceived and thoroughly usable processor that offers something genuinely different in its parallel frequency-targeted enhancement paradigm.

It can certainly do full-on distortion of the wantonly creative kind, but its real engineering worth lies in its ability to add high-end detail (sparkle and bite), low-mid emphasis (bass presence and ‘poke’) and general sheen to all kinds of instrumentation and mixed signals, up to and including the mastering stage.

It’s a shame there’s no I/O spectrogram or metering of any kind, and the mid-or-side thing is a minor blip, but neither of those prevent Spectre from earning our enthusiastic recommendation as a unique, interesting and endlessly colourful harmonic enhancement effect.