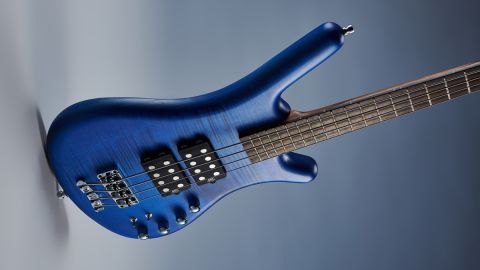 A high-spec variant of a classic design.

This Corvette $$ is no run-of-the-mill Warwick, readers. Finished in lustrous Ocean Blue Satin and with an exclusive AAAA+ grade maple top, it’s been produced strictly for dealers associated with the German luthiers’ UK distributor HTD.

Normally, you’d pay around twice as much as the pricetag here for a maple top-equipped Corvette, so it’s an opportunity to snap up a relative bargain. The deal also applies to Streamer LX basses and to both models’ four- and five-string variants, but you’ll need to be quick off the mark to get one.

We’re still paying £1700 plus change for this instrument, mind, so we have every right to expect a near-flawless experience. Fortunately the build is exactly as we’d expect. With its fourth decade well underway, the Warwick brand is established enough so that most of us understand what its basses ‘feel’ like in much the same way that we’d recognise a Fender if one were handed to us while blindfolded - and that feel is present and correct.

From the top, the familiar angled tuners - still a matter of taste, after all these years - turn solidly and incrementally, while the neck feels both long and narrow thanks to its 1.5” nut width and the usual extreme access to the higher register. This is enabled by the long horns and deep chamfering around the four-bolt neck joint. Built-in straplocks and a pop-out battery compartment show that thought has been given to the real-world requirements of the professional bassist, while the two passive MEC humbuckers are solid. They’re placed very close to one another, though, which might make you wonder whether they can be very tonally different (see below for more on that). Finally, a lightweight but strong two-piece bridge in functional chrome rounds the Corvette off nicely.

Pull out the volume pot and you’re in passive mode, where the Corvette sounds exactly like every Warwick you’ve ever heard - woody, low-mids-heavy and perfectly useful. Drop back down into active mode, though, and you’re in rather more advanced territory, with detented bass and treble boosts to play with that deliver some serious power. The low-end control is particularly meaty, bringing a blast of bass that will satisfy even the most ardent reggae and dub player.

You can modulate these tones further with a pickup blend (also detented), but as the units are so close together, there’s only a minor variation in sound. However, there’s a ton of range at hand with the two microswitches positioned beneath the pickups, each of which has three positions. There’s no end of tonal tweaking to be had with these series, parallel and single-coil modes, although you’ll need to spend time on the system to make the most of it. Some combinations of pickup and microswitch - and there are many - make a vast difference to the tone; some make barely an iota of modulation, to our aged ears anyway.

As for the Corvette’s playability, that is its finest feature. Add a relatively chunky neck to a narrow nut width and what do you get? Jazz heaven, that’s what, and although this bass doesn’t really resemble a J-Bass in any seriously arguable way, the familiar J comfort is certainly there. The strings feel grippy rather than flappy, with the noticeable bolt-on bounce that we all love, and access to the top end is state-of-the-art.

The upper mid-market price point is saturated in our business, so you have a ridiculous amount of choice up there. However, as we pointed out above, this is your chance to nab a Corvette for far less than you normally would, so if you’re already a convert and you’re in need of a new W, you know what to do. Newcomers to the brand will also enjoy its character and style, but do test-drive cheaper models first. Either way, we’re convinced.