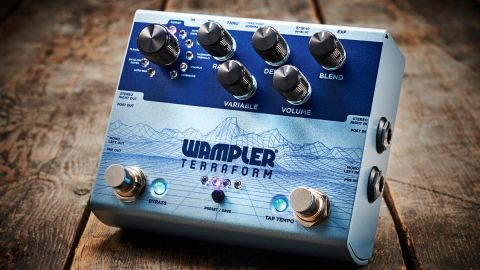 A super-versatile modulation unit that's not going to bogart too much pedalboard real estate, with a pre/post operation, what's not to like?

Wampler has spent some time in getting into the modulation game but the multi-functional Terraform unit is a feature-packed statement of intent that it intends on playing for keeps.

In terms of size, price and functionality, it is entering the market alongside units such as the Strymon Mobius, Boss MD-200 and the Eventide H9. All pack a huge range of modulation options into one package, saving you on 'board space and freeing up power outlets.

Wampler's Terraform has 11 modulation types, and these fit in a two-switch enclosure that's about the size of three nano pedals. There is no digital menu. There are five knobs to control the effects and a tap-tempo footswitch. You have eight onboard presets at your disposal and you can run the unit in mono or stereo. You can also split the mono signal chain so you can place some effects after your gain pedals or before them.

There might be a huge range of modulation options here but Wampler has been laser-focussed in spec'ing this unit in the sense that none of the options are too esoteric. It is a surprise that there is no vibrato mode. It's a mainstream effect, if criminally underrated by some. But there is a workaround; dial the blend of the chorus up to 100 per cent wet and you're in vibrato land.

Getting into the sounds is easy. The layout is intuitive, and once you find a sound you like you can assign it to one of the eight onboard presets. You can scroll through or load presets via a small black button that's positioned half-way between the two footswitches. If you're particularly careful, you could do this by foot.

Better still, use the tap tempo footswitch. Holding it down for three seconds brings up the Preset mode and then you can scroll through and load from there. This works well until you have a preset with which you'd like to use the tap tempo. MIDI control is also an option when it comes to presets – you can map presets to program change numbers. You can also assign an expression pedal to take control of any of the five controls.

As for the main controls, we've got a rotary switch to select the 11 different effect types. An LED lets you know which one you are in at any given moment. There are also controls for rate, depth, blend, variable and volume.

Most are self-explanatory but the variable knob is interesting in that its function depends on whichever effect you are in. In chorus mode it will take off some of the bottom end, while in rotary it sets the ramp time between speeds.

There are so many sweet sounds. The tremolo is excellent. There are two types of amp tremolo: traditional sine wave and the more phase-y harmonic style, but if you visit the extremes of the depth control you can have a square-wave trem to play with.

The small black switch dead-centre in this picture selects between Normal modes for basic mono or stereo operation and Pre/Post where it assigns individual effects into specific places in your mono signal chain. Uni-Vibe before or after drive? It's your call.

Elsewhere there are two fine choruses, a flanger, phaser, and a lovely gelatinous Uni-Vibe effect that's ideal for getting your Robben Trower/Hendrix thing going. The rotary effect has a very flexible set up. Set a blend between horn and drum, with individual max speeds for each, and with using the tap tempo you can set it for slow/fast switching. Just add a little drive to your signal if you want that Leslie tone.

Funk players will love the envelope filter. You can get some single-note quack and synth sweeps going in no time, while the Autowah is super-usable thanks to the tap tempo. Those looking for something more exotic still from their modulation will love the attack envelope manipulation with auto swell – it's psychedelic and fun.

Having the option of placing gain before or after some effects make the Terraform even more versatile – simply connect a drive pedal from the Pre Out to the Post In sockets, or using the four-cable method with the Post Out and Post In sockets of your amp's effects loop. Out of the box, the Terraform has defaults as to which effect goes Pre or Post but these can be changed easily.

Tweakability is very much a strong suit for the Terraform. Those looking for a one-stop solution to their modulation and want serious options in a compact form will love it.

MusicRadar verdict: A super-versatile modulation unit that's not going to bogart too much pedalboard real estate, with a pre/post operation, what's not to like?

"The things that set the Terraform apart are savvy programming with wisely chosen parameter and range choices, an intuitive interface, and a wealth of clever extras... For many players, the Terraform will be a one-stop modulation/filter shop."
PremierGuitar