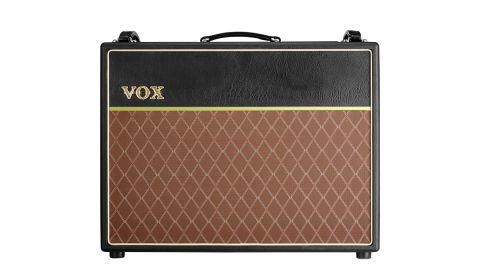 Yes, it may certainly be expensive, but this amp is a beauty, and an historical artefact to boot.

The adjective ‘iconic’ is often over-used in our industry but few would disagree the gold Vox badge on the front of a diamond grille cloth is one of the great icons of electric guitar and rock music.

Vox is arguably the genesis of British rock guitar, and for over 60 years AC15 and AC30 amplifiers have been responsible for creating some of the most inspirational music ever recorded.

Designed by a brilliant team headed up by Dick Denney and Tom Jennings, the 1957 AC15 was Vox’s first proper guitar amplifier and proved to be an instant success.

The AC30 came slightly later following a request from Hank Marvin for a ‘double AC15’, so he could hear himself play over hordes of girls screaming for Cliff Richard. Not long after that, Vox did a deal with Beatles manager Brian Epstein and the rest is history... although not all of it good.

Vox’s journey took a long and bumpy detour, due to poor business decisions and the departure of Jennings and Denney in the late 1960s. It wasn’t until Vox was rescued  by its current owner, the Japanese synth and tech giant Korg in 1992, that things began to get better. Manufacturing was quickly moved offshore to keep prices competitive, and has stayed there ever since.

Vox’s current position as a major global force in musical instrument manufacturing is proof Korg made the right decision, even though purists may have moaned this quintessentially British guitar amp was no longer being made in Britain.

Moan no longer though, because to celebrate Vox’s 60th anniversary (and 25 years of Korg’s custodianship), Vox has released special limited editions of the AC15 and AC30, hand-wired just like the originals and - possibly for the last time - built in the UK.

Like the originals these amps are heavy, thanks to top-grade birch ply, hefty transformers and exclusive Celestion loudspeakers. The AC15 tips the scales at 24kg, while the AC30 is 34kg - definitely a two-person lift, unless you want to injure yourself.

It’s not a case of ‘never mind the quality, feel the weight’ though, as both combos are built to exceptionally high standards. Vox’s 1964 time reference for the AC30 is a significant year as this was when the ‘Top Boost’ add-on unit moved from the back panel and became properly integrated into the circuit.

The smooth vinyl, dark grey control panels and Celestion Alnico Silver speakers (made in the UK, specifically for these amps) are just about period-correct too, although we’d prefer to see a copper control panel purely for the visual appeal.

Remove the rear panel and you can see the hand-wired circuit, built up on long, thin strips of paxolin turret boards. Carbon comp resistors and mustard capacitors are carefully positioned and soldered to perfection, with hook-up wires neatly routed and twisted. Some of the original 1960s components were allegedly selected for appearance as well as performance and there’s more than a little of that on these amps, which look the part on the inside as well as the outside.

With such attention to detail, you’d expect these amps to sound at least as good as the best AC30 you’ve ever heard, and we certainly think that our review model does. It uses a GZ34 valve rectifier. This is crucial to the AC’s dynamic response, and needs a few minutes to warm up and stabilise before the noise levels reduce and the amp is ready to use.

The AC30 is loud when turned up, with a huge variety of tone from its three channels. The Brilliant channel’s treble and bass controls give it increased flexibility, flattering single coils and humbuckers, while the backwards Cut control sits in the power amp, reducing highs as the control is turned clockwise.

The Vib/Trem channel is where you’ll find all the classic early 60s sounds. Two rotary switches toggle the effect between pitch (Vibrato) and amplitude (Tremolo) modulation and provide a choice of three speed settings. It may not be authentic, but we’d prefer the slow speed setting to be slower - about half of what it is. The medium and fast settings are just fine, evoking the heady days of original Britpop and Merseybeat.

Every classic AC30 tone you want is here, although there are no concessions to the 21st century; meaning no effects loops, footswitchable channels or boosts. If you want to recreate those classic vintage sounds from the likes of Marvin, Harrison, Gallagher, May and the Edge, you’ll need to add some well-chosen effects. A pedal board with a quality analog delay or two, digital reverb and a drive pedal that can work as a clean boost will get you pretty much anything you want; but major rewards still come from the simplest possible setup of all: guitar, cable and amp.

Work with the Vox to discover what that coveted chiming rhythm tone sounds like and you’ll find it, just as you’ll find the addictively edgy intros to Paperback Writer, Day Tripper or Gimme Stitches, among countless other moments of Vox sonic déjà vu. The exclusive UK-made Celestion Alnico Silver loudspeakers fitted to both combos are superb and will sound even better once the cones have had a few more hours of playtime to loosen up properly.

This isn’t just a guitar amplifier, it is a history machine with period-correct looks, painstakingly authentic construction (as far as modern safety legislation will allow) and above all, sublime authentic tones from those hot, cathode-biased EL84 valves which properly deliver everything you’d expect from an original classic Vox.

Aimed at serious professionals, dedicated amateurs and hardcore Vox collectors, these 60th anniversary amps may come with eye-watering price tags, but you’d pay seriously big money for original 1964 models of dubious origin and reliability... if you can find them.

If you’re a player, buying one of the anniversary amps gives you the peace of mind that comes from using reliable, new equipment, while collectors will be happy in the knowledge they’ll probably never lose money on their investment. There are luxury heavy-duty slip covers to protect them, as well.

The AC30HW60 will only be available during 2017 in limited quantities and after that, well, it’s quite possible there will be no more. Ever. These then could be the last hand-wired Vox amps to be made in the UK; they’re fitting tributes to the brilliance of Tom Jennings, Dick Denney, Derek Underwood and the Dartford-era team’s spirit of innovation, that Korg has safeguarded and built on to create today’s modern classics.