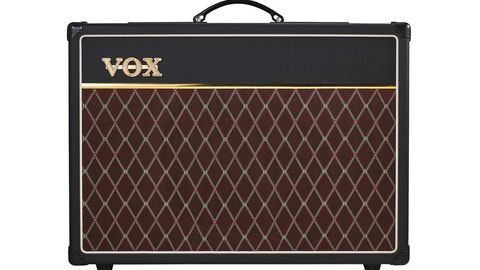 Check this one out while you can.

Over 60 years since its introduction, the AC15 combo is still a firm fixture in Vox’s current catalogue.

The current non-hand-wired C1 model has benefitted from some useful upgrades to make it more relevant for modern music-making, yet the cosmetic and sonic DNA of the original is still evident to anyone with more than a passing interest in the legendary amp brand that powered Beatlemania and the 1960s British Invasion to worldwide fame.

For some time now it’s been possible to buy the AC15C1 with a choice of loudspeaker: the standard model is Celestion’s Greenback, while the famous Alnico Blue is available as a premium option, at a premium price.

Currently, there’s also a limited-edition AC15C1 in cream vinyl, with a Celestion Creamback, one of the most popular new drivers in Celestion’s range. Now a fourth choice is expanding the AC15’s tonal possibilities: a limited-edition run of AC15C1’s featuring the G12C driver made by Warehouse Guitar Speakers from Kentucky, USA.

In terms of build and features, this limited run of the AC15C1 is almost identical to the standard model, except for the speaker and a smart leather textured vinyl replacing the traditional basketweave covering. There are two non-footswitchable channels called Normal and Top Boost, with a volume control for the Normal channel and Volume, Treble and Bass controls on the Top Boost side. There’s a Level control for the built-in spring reverb, and Speed and Depth controls for the AC15C1’s tremolo circuit, with master volume and Tone Cut knobs, the latter a classic Vox feature, working in reverse by cutting treble as it’s turned up.

Inside the chassis, most of the electronics are held on two printed circuit boards: a large one that holds most of the components including the control knobs, and a smaller one supporting the valve bases, which point downwards from the bottom of the chassis. It’s built to the usual high standard we’ve come to expect from Vox, with neatly tied wiring and bright soldering, and looks robust enough to handle anything from weekend warrior gigs to full-on professional touring. The G12C loudspeaker on this limited-edition run comes from Warehouse’s American Vintage series and features a seamed cone, 1.5-inch voice coil and a 35oz ceramic magnet for full-on American tone.

Changing a loudspeaker can make a significant difference to the way a valve amplifier sounds and responds. Characteristics such as sensitivity (the amount of volume the speaker generates for a given amount of input power), frequency response and damping may alter things a lot - or sometimes not. This is one of the common difficulties involved in swapping loudspeakers: you can burn the midnight oil poring over spec sheets, but until you have a loudspeaker plugged into your own amp, you won’t really know what it sounds like, because a speaker’s behaviour is largely dependent on the power stage topology, with biasing and negative feedback, output valves and the output transformer all affecting the result. To add another variable, guitar speakers with corrugated-paper surrounds take several hours of use to loosen up before they produce their definitive sound.

On paper at least, Warehouse’s G12C is a very different animal to the Celestion G12M Greenback, with a different cone formula, smaller-diameter voice coil and a much higher resonant frequency: 134Hz compared with the Greenback’s 75Hz. The Warehouse driver also has a couple of decibels’ extra sensitivity and a much higher power rating, 75 watts compared with the Greenback’s 25 watts, probably not so critical on an amp that produces 15 watts.

We already know that the AC15C1 has a wide tonal range, with sparkling cleans from the famous Top Boost channel at lower-gain settings, through the elusive Vox chime that stamps its authority on any rhythm part, to fat mid-heavy compressed overdrives with that unique Vox Class A grind. So, what difference does the Warehouse speaker make?

We tried the AC15 with a variety of single- coil and humbucking guitars, including our regular Duncan APS1-loaded Strat and a Les Paul loaded with Duncan PAF-alikes. Combining the AC15’s prominent midrange with the extended bass and treble response of the G12C driver produces a rather special combination that enhances the AC15’s complex treble, smooths out  the bottom-end and - when overdriven - balances the midrange grind for a more articulate solo sound. Warehouse describes the G12C as having “a punchy, dynamic low-end response coupled with a musically articulate top-end”, and we’d certainly agree with that. The G12C’s influence expands the normal AC15 tonal range, adding extra finesse that will be most appreciated by players who know how to drive an amp from the guitar, giving it more of a ‘boutique’ vibe that sits comfortably alongside other EL84-powered US exotica costing three or four times the price, with plenty of volume for smaller live gigs.

We mentioned that swapping loudspeakers on your favourite amp can, to some degree, be a step into the unknown. One of the AC15C1’s selling points is that the good people at Vox have taken those steps for you, finding a choice of speakers that add different nuances to the amp’s formidable tone without hijacking that Vox magic.

Warehouse’s G12C is another inspired addition, lending the AC15C1 a singular transatlantic accent that wouldn’t be out of place on any modern Nashville gold album, yet retaining the midrange earthiness and grind that’s key to the Vox sound.

These limited-edition runs are great for keeping the catalogue fresh - the only downside is that they are limited, although Vox hasn’t set an end date for this one yet. The best news of all is that while the sound might be in the boutique league, the price tag is still in the real world, although if you can afford it there’s a G12C option for the hand-wired AC15 as well.

Perhaps there’s a Warehouse-equipped AC30 hiding just over the horizon... But in the meantime, if you’re interested in hearing what a Warehouse speaker can do for Vox’s AC15, then don’t delay - check this one out while you can.