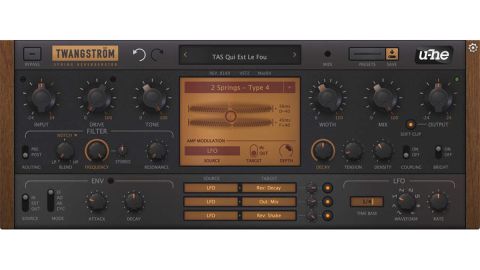 With its top-notch modelling and deep modulation, u-he’s spring reverb is a wonderfully creative plugin at a great price.

We don’t know whether or not it was always u-he’s intention to eventually start breaking the vintage analogue-style effects modules out of its softsynths and expand them into plugins in its own right, but we’re certainly glad it’s running with the idea.

First, we had the fabulous Colour Copy bucket brigade delay, an expansion on Repro’s Lyrebird; and now it’s joined by a beefed-up take on Bazille’s Spring Reverb.

Described by the developer as “a flexible spring reverb box-of-tricks”, Twangström (VST/ AU/AAX) builds on the Bazille original by adding two further springs (for a total of three), a filter and a modulation system that takes it far beyond the bounds of ‘realistic’ spring reverb. The tanks are modelled on those found in specific guitar amps, which suggests that, in terms of classic dub-style spring sounds at least, it’s intended first and foremost for use on guitars, keyboards, vocals and the like.

The central panel in the Twangström interface offers a menu of three spring configurations: ‘2 Springs - Type 4’, ‘3 Springs - Type 8’ and ‘2 Springs - Type 9’. Type 4 is based on “a large dual-spring tank like those in early Fender guitar amps” and features jointed (ie, split in the middle by small metal interconnects - see screenshot above) springs that yield a lively sound with a bold low end. Type 8 models a smaller, Marshall-style tank with three springs, and is the least weighty of the three but more dense than Type 4. And Type 9 is a bigger version of Type 8, with its three jointed springs resulting in a more tamed presentation.

The Decay, Tension and Density knobs work together to shape the reverb’s tail and character. Decay controls the damping of the springs, rolling off high frequencies first. Tension alters the time it takes for vibrations to travel from one end of each spring to the other, and is described in milliseconds and note pitches in the central graphic. The springs are slightly uneven in length, so they always differ, ranging from 92 to 18ms at the two extreme ends of the Tension knob’s range.

Density governs the dispersion of echoes and thus the reverb’s smoothness: turning it up reduces the audible oscillations of the springs for a less delay-like sound. The adjacent Coupling and Bright switches feed the springs into each other so they interact rather than vibrate independently, and double the internal sample rate for a top-end boost.

When a real spring reverb is shaken, the rattling of the springs generates a cacophony of its own, and Twangström emulates this with the Shake parameter, operated by vigorously dragging the ring on the springs graphic up and down. Why? Well, u-he suggests applying subtle modulation to Shake to agitate the reverb, which can indeed work well when done with care.

Twangström provides a good amount of pre- and post-processing for the spring tank. The input signal is overdriven and saturated with the Input Gain and Drive controls, while the Tone knob adjusts a tilt EQ. At output, Width control sweeps from mono to super wide using mid-side processing, with individual spring positions fixed in pan positions per their configuration.

The 12dB/octave resonant filter can be placed before or after the tank, and morphs continuously from low-pass to high-pass via a notch or band-pass response. The Stereo knob applies left/right offset for creative asymmetry.

The spring’s the thing

With its weird, twangy sound and distinct upward pitch envelope, spring reverb has long been a popular effect among producers of dub and reggae - in which it’s simply part of the genre vocabulary (think King Tubby and Lee ‘Scratch’ Perry) - but it also helped to define the sound of surf rock in the 50s and 60s (Dick Dale, The Beach Boys).

Originally invented as an onboard effect for the Hammond organ in 1940, it quickly found its way into guitar amps by Fender and other manufacturers. The mechanical principle on which it works is really quite straightforward: one or more tensioned springs are suspended within a metal case, each one connected to an electromagnetic transducer at each end, and in some cases, divided into ‘separate’ springs using metal joints, for extra diffusion.

The transducer at the ‘input’ end turns the incoming signal into vibrations along the spring, while the ‘output’ transducer converts the vibrations back to an electrical signal, which exits the loudspeakers at which it eventually arrives as a characteristically dark and ‘springy’ reverberation. This reverberation is anything but linear, with a fairly defined (but very fast) oscillating rhythm to it, influenced by the spring length and source material.

Up to three parameters (plus the Amp, which has its own modulation routing) can be modulated by the onboard envelope and LFO via a small modulation matrix. The Envelope is triggered by the input, output or an external sidechain, and can work as a regular envelope follower or a threshold-based system, or be set to cycle through the attack and decay like an LFO. The actual LFO features a broad selection of waveforms and scalable rates, synced and unsynced, from 0.1s to eight bars.

Although three/four assignment slots doesn’t seem like many, we didn’t find ourselves wishing for more. What we did want, though, was visual representation of our modulations - something u-he never implements, for some reason.

Perhaps due to its guitar amp origins, Twangström is notably low-mid focussed - even for a spring reverb - and the Bright and Tone controls only go so far towards countering that. While we absolutely approve of the particular timbral vibe that u-he has gone for, it does arguably make it a bit less exciting on drums than other spring reverbs.

On guitars, keys and synths, however, that silky smooth darkness - and the amazingly realistic spring behaviour - proves wholly effective, lending sounds a rich, ‘analogue’ flavour that we’ve not come across in software before, and that dub producers will fall in love with. But Twangström is about more than just conventional reverb treatments: it’s the modulation and the versatility of the spring modelling that really define it, enabling the creation of otherworldly ambiences, strange wobbles and unique textures through frequency-, amplitude- and stereo-based movement. Occupying its own niche in the not overly busy spring reverb market, Twangström is a very special thing.