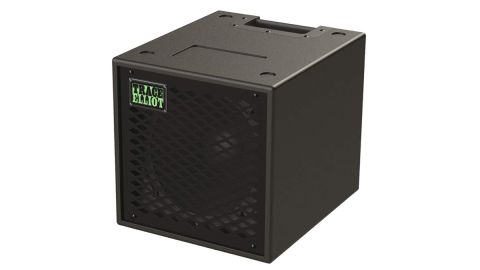 Impressive units - audition them to assess your power requirements.

Last year’s miniature Trace Elliot Elf amplifier was launched with much fanfare and a great reception, considering that the TE gear of yesteryear was renowned for its great power and immense weight.

These new Elf cabinets are a far cry from those historical cabs - but even so, at 400 watts and 300 watts respectively, their power handling claims are impressive for their size. Let’s plug and play...

Both cabinets are painted and finished in a hard, highly durable coating while metal grilles protect the speakers from impact damage. The upper face of each cab features a built-in ‘cradle’ for seating the Elf amp, which will be useful for fans of the unit. Both cabs have recessed handles and sport dual parallel Speakon and 1/4” input sockets to cater for both types of cable connection.

The cabs’ dimensions and weight mean that they don’t require too much physical effort when you move them around. Unfortunately, if you want to mix and match the cabinets, their dimensions mean that they won’t ‘lock’ together for stability, although of course they can be stacked.

Using several basses and different tone setups on the Elf amp, both cabs sound powerful with plenty of dispersal. When used in a gigging band, the cabs perform well, while producing a rather different tonal response, as you might expect. The 1x10 has a high-mid bias, while the 2x8 has a very decent bass response with tighter tones; to me, it ‘breathes’ better and more comfortably than the 1x10.

Slap players and bassists who like a hifi-like response will naturally gravitate towards the 2x8 cab, while rockers, pick players and those who look for a thick bass tone will need to audition both cabs side by side to determine which one they prefer.

Both cabs are fine units, but we feel that they would benefit from additional horns or tweeters for improved finesse, clarity and detail. Some porting might make them sound ‘bigger’ than they actually are. With so many amp companies benefiting from Class D technology, and all bassists keen to protect their physical health and reduce potential back problems, these highly portable cabinets fit in perfectly with the Elf ethos.