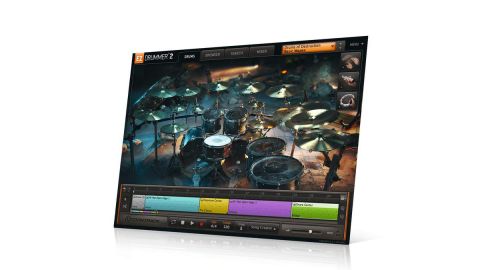 With so many great add-on packs available, it’s really a no-brainer. Drums Of Destruction is a genre-specific pack, but if you want heavy, we reckon it’s the best Toontrack has offered yet.

We’re big fans of Toontrack here. What started as a collaboration with Meshuggah man Tomas Haake 20 years ago with ‘Drum Kit From Hell’ has grown into a mind-blowing range of sample packs with which we can expand the sonic palette of our electronic kits.

It’s a simple formula, but one that delivers more often than not. This time they’re collaborating with Lamb Of God’s Chris Adler, one of modern metal’s most influential drummers, who has also done stints with Megadeth, Testament and more.

For Drums Of Destruction, Adler’s monstrous Mapex Versatus kit (2x 22", 10", 12", 16", 18") was recorded at Hybrid Studios in Santa Ana, California after Adler had tracked the drums for LoG’s (recorded as Burn The Priest), Legion: XX album in 2018. Chris’ drum sound is always clear and articulate, with his distinctive high-pitched (by current standards) Warbird snare sound allowing for fast playing to come through in the mix. In addition to his Mapex, LoG producer Josh Wilbur took the opportunity to add a Pearl Reference (2x 24", 10", 12", 14", 16") into the sessions, offering some sounds away from Adler’s regular gear.

With Toontrack’s output verging on prolific as of late, now is a good time to remind ourselves of the price tag for this set of sounds. At two pounds over £50, we’re getting some seriously strong pedigree with this. The sounds are exactly what we’d hoped for: clear without being polite, aggressive without being fatiguing. The toms and kick in particular have that nice balance of depth and attack – to our ears perhaps slightly scooped in the midrange to provide clarity - without losing their power. Likewise, the range of snare sounds on offer have enough variation to stop you getting bored.

We’ve reviewed many Toontrack packs here at Rhythm, both for EZ Drummer and Superior Drummer, and we’ll reiterate for those who haven’t already delved into the world of triggering from their electronic kits: buy a copy of EZ Drummer 2.