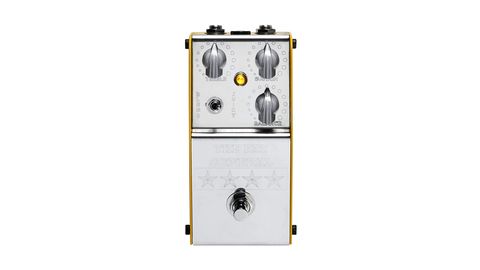 A high-quality and easily set up compressor that has the added flexibility of two flavours onboard.

The Fat General has the usual distinctive ThorpyFX design elements and bulletproof build quality, but is the result of a collaboration between Adrian Thorpe and Dan Coggins, co-founder and co-designer of Lovetone pedals. After Lovetone, Dan was responsible for the Dinosaural OTC-201 compressor, which is extremely rare now that it’s no longer in production.

It’s considered a bit special and unlikely to be given up by those who have one. Fortunately, if you missed out on an OTC-201, you can be assured that there’s plenty of that pedal’s DNA in The Fat General, which is based on optical circuitry and offers two modes of parallel compression where some of the dry signal is mixed in proportion with the compressed signal.

Juicy mode features a fixed blend of 90 per cent compression and 10 per cent dry sound. It’s most like a traditional guitar compressor in that it has one knob (Sustain) to increase the strength of the compression and another (Balance) to set the output volume, starting at zero but with plenty to give you a boost depending on how much compression you’ve dialled in. What you’re getting here is smooth, fat compression that can get nicely squashy at higher settings yet delivers a consistent snappy sharpness at the start of notes, though not unnaturally so.

It’s worth noting that the pedal is extremely quiet with very little hiss even at full compression and it doesn’t mess with your core tone either, except via its Treble knob, voiced just right to add a bit of sparkle. The crisp note articulation does the job for fast-flowing Telecaster picking, while that Roger McGuinn-favoured combination of squishy compression and treble boost works great on electric 12-string for a familiar 60s jangle.

Blend mode uses the Balance knob to mix the dry and compressed signals together from fully dry to a parallel mix, allowing you to gradually add the compression to find your favoured sweet spot of extra thickness and sustain. This mode naturally lends itself to slide and lap steel, but it’s also great for conventional guitar where its superb tone conditioning could be a key component of your sound that you’d want to keep on all the time.