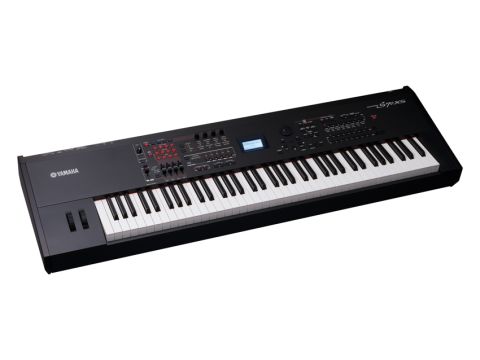 It's not cheap and is let down by its small screen and unintuitive interface, but the S70XS still has a lot to offer.

Originally launched a decade ago, Yamaha's S line was designed to offer top-end sounds and features in a package specifically aimed at stage/solo performers rather than hardcore sound designers.

Now, after several incarnations, Yamaha has launched the XS-labelled, S-series keyboards, currently comprising the S70XS (the subject of this review) and the S90XS. The only difference between the two is the length of keyboard, with the 70 having a 76-note note weighted hammer-action keyboard and the 90 having an 88-note board.

The action itself is very nice indeed - well balanced and not too heavy, and it doesn't suffer from any sponginess. Plus, it's playable for all types of sounds/instruments, including synths and organ stuff too.

Although the S70XS is not what could be described as lightweight, it's certainly manageable and one person was able to carry it into our studio. However, bear in mind that once it's in a case for gigging, moving the S70XS is a two-man job.

Build quality is very good throughout, with nice wooden end panels and a military-grade metal case. All the sliders and dials feel great, in line with what you would expect of an instrument at this price point. There's even a vast table-like expanse at the top left to rest your laptop on. (Really, does it need to be this big? Wow.)

Interface and layout wise it's a mixed bag. There's a lot going on on the front panel (too much, in our opinion, for a stage instrument) and it can be pretty confusing to navigate.

Another downside is the tiny screen. While we applaud Yamaha for trying to make everything accessible without having to rely on the screen this is like something from a synth from five years ago. Good job the included Cubase AI4-based VST editor goes some way to making up for this.

"Build quality is very good throughout, with nice wooden end panels and a military-grade metal case."

We still feel that some Yamaha keyboards suffer from unnecessarily complicated interfaces and unfortunately the S70XS continues this tradition and programming it is frustrating at times, with too much scrolling and button pressing for our liking.

On the upside, there is direct access to most of the main functions using the matrix system/dials and sliders, including filter cutoff, resonance, envelopes, effects/effect levels, and levels of parts within a performance/arpeggiator pattern. Plus, there are direct buttons to bypass each level of effect and EQ (insert, chorus, reverb, master FX and master EQ).

The S70XS has plenty of onboard connectivity, including two sets of stereo outputs (one set to assignable) a mic input (for plugging in mic'd vocals, guitars and routing them through the chorus/reverb effects and vocoder), and USB for MIDI connection to a DAW (and to the included Cubase AI4 VST editor). Plus, the S70XS can control your DAW's transport and act as a control surface.

On top of this, the S70XS can record all internal and external audio (connected to its input) direct to its onboard f ash memory (which gives up to 18 minutes of audio recording or 192MB) or to a connected USB stick. MIDI files and WAV/AIFF files can be played back directly from a USB stick or external USB drive too.

There are four main operating modes: Voice, which just uses one element/part; Performance, which stacks elements/parts within a sound for splits and layers and allows complex layered rhythmic/auto-accompaniment backings to be made using the four-part arpeggiator (including beats too); Multi, which allows assigning of sounds to MIDI channels for quick selection and/or external sequencer playback; and finally Master, which handles controller functions plus collates all your favourite voices, performances and Multis under one header.

This is all a little confusing at first, but again, persevere and using the different modes will eventually become second nature.

With so many sounds/performances on offer the category search function is a godsend and you can search by type and sub type too to quickly locate the sounds you're after.

Sound-wise, there's huge scope and something to suit every style and player. Highlights include some very realistic pianos, including authentic reproductions of Yamaha's S6 and C3 grands (with string/sympathetic resonance/half pedalling) loads of decent electric pianos (Rhodes/Wurlitzers) and some great acoustic guitars, drum sounds/kits, pads, strings, brass and tuned percussion.

"Sound-wise, there's huge scope and something to suit every style and player."

The Clavs and organs, however, lack the authenticity of the acoustic pianos and some of the other pianos and EPs sound a little clinical/lifeless, particularly with the effects bypassed. It's disappointing too that the sliders don't act as organ drawbars and that many presets are swamped in reverb and other effects. However, there are also some very useable analogue synth leads and basses, plus 18 onboard filter types too.

Strangely enough, we found the cutoff dial induced stepping when sweeping the cutoff but using the mod wheel for cutoff didn't, so watch out for that.

The onboard arpeggiator has a staggering 6,779 preset types and 256 user slots, plus up to four parts, so every type of pattern and style is covered. Elsewhere, there are also some great performance presets that make use of layered arpeggiator patterns stacked with drums, basses and strings that also react to the chord being played for instant and versatile auto accompaniment backings. Perfect for solo performers!

To conclude, there's a lot on board the S70XS. It looks and feels rock solid, and comes armed with a staggering array of decent sounds that should keep you interested for years.

For these reasons it's a major contender. That said, it's let down by its confusing interface that'll take more than a little practice to master.

Be sure to check it out if you want a great sounding, versatile and playable stage piano/synth though. We think you'll be particularly impressed by the keyboard, versatile features and the industry-ready quality of the onboard sounds.

Listen to a selection of S70XS sounds:

Concert grand (dry then with reverb)