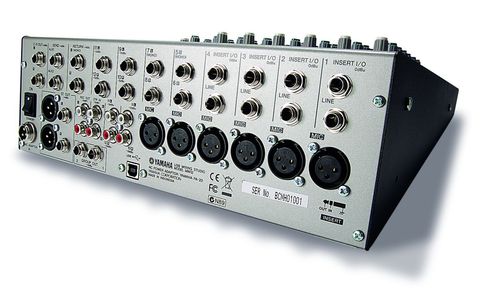 Good value and great for beginners, analogue mixing is rarely such a modern thinker.

The Yamaha MW12 is as straightforward an analogue mixer as you're ever likely to use.

The MW12 has twelve channels of input, EQ, and a sneaky USB port round the back, pre-loaded onboard drivers and a bundled copy of Cubase LE for PC and Mac, all of which means you can be using this desk to directly feed audio into your computer within ten minutes of it being unpacked.

The MW12's channel strip is straightforward and familiar. At the top, you'll find a Gain control with peak light. Also at this stage, an 80Hz highpass filter option allows you to lose any inherent noise from, for example, mic proximity or electrical interference.

Two auxiliaries also grace each channel, as does a channel On button, a PFL solo switch, a Routing button to allow signals to reach groups 1-2, plus pan and level controls.

The fader is a 70mm affair with a smooth action, which is by no means a given for a console of this size and price. Well done Yamaha.

The EQ too, is useful. We suppose the only real concession to price is that the mid-range isn't sweepable. Financially, this does make sense, but we still get a little nervous without that control. It's a long way from 100Hz to 10kHz.

Still, the EQ does sound very clean, and as most people will be using this desk primarily as a means to get sound into their computer, we wouldn't have thought that radical EQ work would be called for too often.

All connections are made on the back panel (except for the front-mounted headphone port) and here you'll find that channels 1-4 are set up as true XLR mic, 1/4-inch line mono strips. Inputs 5/6 and 7/8 are switchable, either to serve as mono XLR ins, or as stereo line ins, with channels 9/10 and 11/12 fixed as stereo line ins.

As with everything on this little mixer, the clear layout and unfussy approach means you'll be connected and up and running in no time. There's onboard phantom power too, though be warned there's just a single switch for this for all channels. Sensibly, it's been mounted on the front, so you're not reaching round the back for access.

Even with dependable protocols such as USB and FireWire now the established hubs of our studio, we still expect to have to install drivers for most gear we choose to hook up to our main DAW. Not so with the MW12.

It comes preloaded with drivers for Mac OSX and Windows XP, so setup really is as simple as connecting a USB cable to your computer, and then choosing the appropriate driver from the list that appears in your sequencer.

Thereafter, you can record directly to inputs 1 and 2 and monitor back through a dedicated USB/2-track return. You can then decide whether you want to feed that return back through the stereo buss.

The mic pres offer a perfectly decent sound and the reassuring 'On' lights for each channel allow you to monitor which of your channels are activated at a glance. If the MW12 expands into a range, it would be great if multi-channel recording were available, perhaps via additional groups, as stereo inputs may not be enough.

The simplicity of the MW12 leaves you wondering why more technology isn't made like this. As soon as you're connected, you can route signals and record with a simple USB connection, dumping all computer audio straight back into the mixer for monitoring.

Accordingly, the MW12 quickly becomes a central studio focal point, exactly as mixers should be. There's scope to develop all kinds of products based on the MW12, from true multi-channel recording interfaces, to dedicated control surfaces.

For £250, you get a proper analogue mixer, which is as happy in the studio as it would be doing live recording/PA, and an integrated direct-to-computer recording tool. There's some stiff competition out there, but this is still great value.