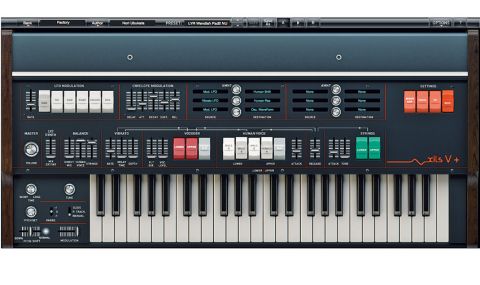 A classic early 80s vocoder-cum-choir- cum-string machine brought back to life in real style - but at quite a price.

Sometimes it seems as if every analogue synth ever made has been hailed as a classic at one time or another. Only a few years ago, the original Roland VP-330 Vocoder Plus was going for paltry sums, but now the word is out and the few of them that remain in working order are fetching upward of two grand.

Yes, for a vocoder. But don't let the name fool you: although the VP-330 was a vocoder, it was bolstered with a divide-down polyphonic synthesiser capable of producing not only the requisite string sounds, but some uncannily realistic vocal timbres as well.

So successful was this design that Roland has been milking it for years, first with the vocoder option for their V-Synth hardware, and more recently with modern, digital knock-offs of the VP itself.

V+, then, is XILS-Lab's software take on the VP-330, and although on first glance it just looks like a beefed-up version of its forebear, as with XILS' other emulations, there are quite a few surprises tucked away under the bonnet.

The cross-platform V+ comes as both an instrument and effects plugin (AU/VST/RTAS/ AAX, iLok and eLicenser versions available). The front panel is bedecked in bold "Bontempi" rocker buttons, while the bottom half is pretty much a 1:1 clone of the original. The panel is divided into sections, with one each dedicated to Strings, Human voice and Vocoder, vibrato and a mixer. There's also a slider to control the level of any external carrier source.

The Strings section houses only a handful of parameters. There's the means to activate the strings on both upper and lower registers of the keyboard, along with Attack and Tone sliders, which are used to shape the envelope and adjust the frequency content, respectively.

The Human Voice section offers male and female voices on the upper keys and two male voices on the lower, plus an ensemble effect to fatten them up. These voices are synthesised - this is certainly no Mellotron - but they can sound quite convincing, depending on the patch. Again, an Attack slider is on hand for adjusting the start of the envelope.

Vocoding was the VP-330's primary purpose, so it shouldn't come as a surprise to learn that V+ is at its best when used as an effects plugin rather than an instrument. The main panel features Upper and Lower switches for assigning upper, lower or both keyboard sounds as the carrier. Then there's a dedicated level adjustment fader, along with the Flt Dir fader, which brings in a bit of the incoming modulator signal for added clarity.

If this was all there was to V+, the price tag would be untenable (more on that later). However, being a XILS-Lab plugin, there are plenty of modern niceties bolted on, such as the dedicated Vocoder panel with sliders to control the quality of the incoming filtered signal, along with an Analyse section for adjusting the timing of the envelope follower circuit, freezing the frequency spectrum of the input or adding the weird Water modulation (that makes it sound like you're singing underwater). You can also select the sidechain input and fine-tune the built-in pitch tracker - which, it should be noted, is based on older analogue style models and thus sounds suitably retro.

Effects come in the form of a delightfully old-school phaser, a simple reverb, the aforementioned ensemble effect (a chorus, in classic Roland style) and Stereo Space (a complex, powerful spatial simulator).

Although V+ is relatively light on parameters, there is a built-in modulation matrix with six assignment slots. Available sources and destinations are grouped as Monophonic (mod wheel, pitch wheel, etc) and Polyphonic (poly pressure, note pitch, etc). Monophonic sources can modulate both mono and poly destinations, but Poly sources only work on polyphonic destinations. There are a total of 11 sources and 24 destinations.

MIDI control comes in the shape of a quick and easy MIDI Learn and CC assignment system. Alas, we experienced our one and only problem while trying to use the MIDI Settings functions to assign CCs - the instrument crashed, taking Cubase with it.

Finally, the obligatory arpeggiator and glide functions are onboard.

So what does V+ sound like? Thick, viscous, shimmering and uncannily analogue. It's eerily authentic, especially when the deliriously dizzy phaser and ensemble effects are brought into play - instant Oxygene swirls that'll leave you speechless. But you'd better get over it and start singing, 'cause for retro vocoder effects, V+ is now the one to beat.

There are better, more articulate modern vocoders out there, but this one is unashamedly "analogue" and sounds fantastic because of it. And combined with the choir patches, it gets even better. Although €149 is certainly quite a hefty wedge for such a limited plugin (we reckon €99 would do it), V+ is a superb vintage vocoder emulation (plus!) that retro fetishists absolutely have to check out.