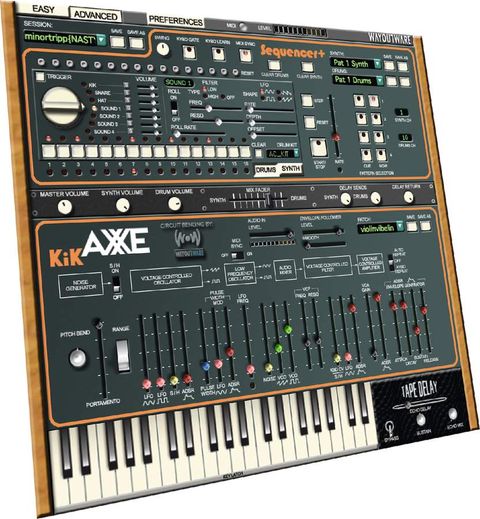 The KikAxxe represents a great way to get that superb Way Out Ware sound at a bargain price.

The KikAxxe is an emulation of the classic ARP Axxe synthesizer. Built with the same modelling technology that Way Out Ware used in its TimewARP, it brings together the Axxe, a 16-step sequencer, a step-sequenced drum machine and a delay/echo effect.

The KikAxxe faithfully replicates the synth features of the ARP Axxe; you have one oscillator with pulse width modulation, a low-pass filter, a VCA and an envelope generator.

That's about as basic as a monosynth can be, but the KikAxxe also includes the ability to sync the LFO to MIDI (which can be handy for cyclic effects) and an envelope shaper for a sidechained audio signal. In addition, there's a sample and hold feature - used in conjunction with the noise generator, this give you all manner of random burbling effects.

So, does it sound like an ARP Axxe? Put simply, yes. If you're looking for that late-70s ARP sound, you'll find it here.

KikAxxe also includes a drum machine that comes supplied with a handful of kits. The Roland TR-909 and TR-808 are here, as are some unidentified digital drum machines and two horrific-sounding acoustic kits. You program them with the standard 16 Roland-style switches and there are filters and LFOs that enable you to muck around with the sounds.

More useful is the 16-step sequencer which is wired to the synth. You change the setting of each step with a slider and it scrolls through each step in the standard fashion, synchronized to MIDI or not.
The included delay effect is labelled 'Tape Delay', but it sounds more like the digital delay that it is. Push the sustain settings all the way and you'll get closer to the tape sound but it doesn't come close to the sound of a real tape delay box. It's nice to have, though, analogue-sounding or not.

KikAxxe sounds great and is simple to use. The ability to switch between 'Easy' and 'Advanced' interfaces is a nice touch; Easy is a touch too simple for us, but it'll be useful for beginners to analogue-style synthesis.

We'd have liked a few more presets, and the fact that the KikAxxe is essentially monophonic comes as a bit of a surprise, but at £39, it's a bargain. Give it a go - you won't be disappointed.