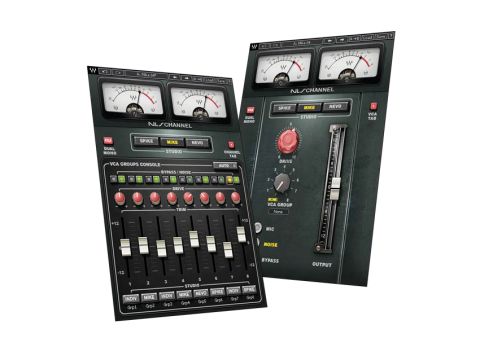 Waves prove once again that it has the ability to hit the top. An excellent plug-in.

Analogue vs digital has, without doubt, been the biggest area of debate for audio engineers and producers since the first digital multi-tracks appeared in the late '70s.

While digital has certainly won in the recorder department (if only from a practical viewpoint), when it comes to mixing, analogue is still the holy grail. Owning a large-scale analogue console, though, is way beyond the means of most music makers, so what can you do to compete with the big boys?

"We've always advocated running consoles hot, so the drive controls quickly came into play and you can push them just like on the real thing."

Until the arrival of Slate Digital's Virtual Console Collection, the answer was probably a summing mixer - and for some people that's still a great solution. If you're short of cash, though - or just want to stay in the box - Waves NLS provides another option.

During their research into the NLS project, Waves' engineers came to realise that it's the tiny differences in harmonic response and distortion characteristics on each individual channel of a console that give it a large part of its sonic character.

Obviously, the fundamental circuit design and the components used make up the bulk of the sound but, unlike their digital counterparts, analogue components are made to within certain 'tolerances' so even with the highest quality components there are minute differences.

Put them together over a large-scale console and those variations make a much bigger difference. It's this non-linearity that Waves saw the opportunity to emulate with NLS.

Consequently, Waves has modelled 32 channels from each console and the master outputs. So, when you insert 32 instances on 32 channels of your DAW, each instance can be of a different channel on the original console.

Those component level variations of the originals can then make up the fundamentals of your own personal console within your DAW, with all the flexibility that digital control can offer.

After deciding to build it, Waves looked for three classic consoles to model - and asked three famous engineers for their personal favourites. Each has been loved and beautifully maintained by its owner, and as each engineer knows his console inside out, who better to say when the modelling sounds right?

The three consoles are all classic British designs. Mike Hedges' EMI TG12345 was originally in Abbey Road and was used to record classic albums such as Pink Floyd's Dark Side Of The Moon; Yoad Nevo's customised Neve 5116 comes from that highly desirable late-'70s/early '80s period; and Mark 'Spike' Stent's SSL 4000G is a true '80s icon.

Between them, these consoles and their owners have racked up millions of record sales, so how did Waves go about capturing the magic?

NLS comes with two basic plugs: channel and buss. As the controls are basically the same, let's walk through the channel variation - you'll use that most.

On launch, the plug looks simple and straightforward. Under the VU meter(s) are three buttons for selecting a console. After you've chosen whose studio you want to be in, the rest of the controls are the same for each.

Drive, as the name suggests, pushes more signal through the channel. The Output fader enables you to both increase and decrease the plug's output, which is particularly useful as being dependent on source-level drive can make things very hot.

The other knob allows you to select none or any one of the eight control groups. Then you have a Bypass switch, a Noise switch that bypasses the modelled channel noise (yes, they went that far) and a Mic switch.

A lot of engineers push a line signal through a mic amp for all the extra harmonic distortion that can add and the Mic switch emulates that. It's only available on a channel, but apart from that the buss controls are identical.

If you open the Load menu, you get to choose between the 32 different channels from each console. NLS automatically loads the next channel with each extra instance you use but this allows you to override that order or choose your favourite channel for certain instruments.

On the top-right you'll see a button marked VCA TAB. Click this and a second page opens up, showing what looks like a little mixer.

These are the controls for the eight VCA groups. Here you can globally set all the functions of the channels or busses connected to it, including a group bypass, which allows for very simple A/B switching when processing multiple channels.

So the big question is, how does it sound? We've been using Slate Digital's VCC for a while now, and we love what that does to our mixes, so we're already sold on the idea of console emulation.

The first thing you notice with NLS is that there's a very obvious colour change between the three console choices. Even with all the drive controls set to minimum, you really get the impression that something is happening and, having worked many times on these period Neve and SSL consoles, we can only say that they sound how we'd expect them to.

We've always advocated running consoles hot, so the drive controls quickly came into play and you can push them just like on the real thing. Taking things up to the point of distortion and then backing off a touch gives you all the harmonic richness you'd expect, and that feeling of added space and depth.

Annoying little peaks get flattened out so there's less need to reach for a compressor, and that mysterious bit of audio glue that you get from a great console is there by the bucketload.

The real surprise is the Mike Hedges EMI. We've never had the chance to work on an original but, having tried the NLS version, we've really been missing out. It's got wonderful presence and warmth and when you push it hard it just keeps sounding beautiful and musical.

The mic option on all three is a real treat, providing a great way to get very usable distortion, and again sounds just like it should. Of course the beauty here is that you can build your own hybrid console in your DAW using the different colours for different instrument types and, because the drive control on the VCA group is an offset master, you can set all your channels how you want and then try adding a bit more or less overall from the group itself.

If you're looking for that intangible something that an analogue mix gives you, then this is the closest yet that we've tried 'in the box'. Hats off to the Waves team. They've done it again.