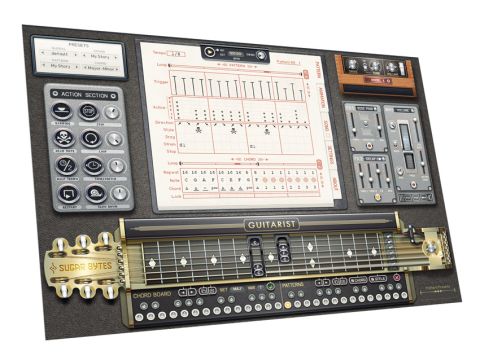 Guitarist falls short in a few key areas, but the fundamental concept is solid and the interface is likeable.

Billed as "the most complete guitar software of all time" and "the perfect guitar emulation", Sugar Bytes' Guitarist had our expectations running high.

If the claims are true, we should be able to create the sound of any type of electric guitar with it, played in any style, running through practically any amp/effects rig - oh yes!

The attractive GUI is dominated by its central work window, with the guitar neck at the bottom. Pressing the Play button kicks off the default song: the strumming machinery springs to life, the robotic 'fingers' jump around the fretboard, and you can see the step sequencer working through its pattern in the main window.

The built-in sequencer plays the guitar, using its own bespoke controllers for the different articulations. Alternatively, you can also trigger chords and strumming via MIDI.

We first ran through a few presets to get a feel for what Guitarist can do. The results are mixed. Generally, the cleaner riffs are more successful, with some surprisingly good picking and strumming action.

Some of the rock efforts, on the other hand, are embarrassingly robotic. Oh, and it seems that there's no way to change tunings. This isn't the most complete guitar software of all time!

OK, let's back up a bit. This isn't quite what we expected, so what is it? It's a virtual guitar that's played by a pattern sequencer and is designed to emulate rhythm parts played on an electric guitar.

That strumming pattern can then play a series of preset or customised chords in whatever sequence you like, and in turn these sequences can be chained into a song.

In addition, the Animation feature lets you change notes in each chord throughout the pattern to enable melodic parts with hammer ons and pull offs.

There's a choice of four sampled guitars: a Duesenberg Starplayer Special in both standard and bright varieties, a Stratocaster and a Telecaster.

The guitar multisamples can be triggered in a random round-robin sequence that keeps repetitions sounding natural, and the mod wheel can be used to dampen/deaden.

Patterns can be dragged and dropped into MIDI sequencer tracks and there are some fun extra controllers for looping and timestretching that bring a modern edge to a traditional instrument. There's also a nice Slow Down feature that gives natural-sounding rallentandos.

There are three amp options (two modelled amps and DI/bypass), a modulation box, a delay/reverb stomp and a volume/filter rocker pedal with which to shape your sound. These effects are in a fixed order and sound passable; far better results are achieved by putting Guitarist through a dedicated amp sim plug-in.

Guitarist falls far short of its claim of being the most complete guitar software of all time. An instrument that combined, say, Virtual Guitarist 2, Electri6ity, Guitarist, VSL Guitar, AmpliTube 3 and Guitar Rig 4 would perhaps be able to make such a bold claim - but we feel that Sugar Bytes' wording is misleading.

Taken for what it is, Guitarist is a nice customisable strumming and picking machine that's great for laying down super-tight funky wah parts. If you need electric rhythm parts in a hurry, it could get you out of a spot, and as a songwriting tool, it's awesome. But a 'must have' product should be able to do a lot more.

We noted a number of omissions and shortfalls in use. There's no semi-acoustic 335-type guitar, for instance - this would make Guitarist a jazz weapon! Indeed, acoustic guitars - and even ukuleles and banjos - would seem perfect for this engine. The existing axes have no pickup selection.

Effects-wise, the amp sims are very rudimentary and there's no compression. We'd like to be able to freely move the 'fingers' and save the resulting chords - and create custom tunings and save them as presets. You can detune individual strings, but there's no global fine-tuning.

Finally, we'd like to see a global dynamics setting that controls the general picking hardness. Sugar Bytes acknowledge these criticisms, some of which will be resolved in future updates, and we hear that a Gibson 335 is in the works.

This is a disappointing yet promising start. We're looking forward to the updates, the first of which - v1.1 - should be out by the time you read this.

Now listen to a few examples of Guitarist's sounds with our audio demos:

With band and plug-ins