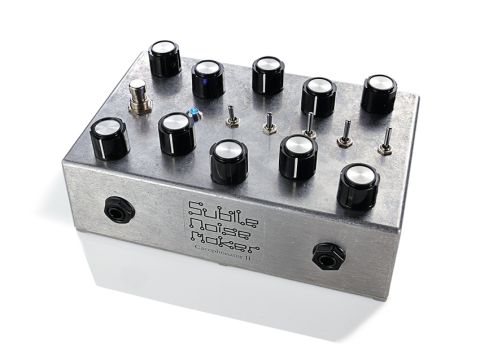 If you can cope with its unpredictable nature, the Cacophonator can make great sounds.

Every now and again a product comes along that deﬁes categorisation. The Cacophonator, conceived in 2006 by synth DIY enthusiasts Kevin Buckholdt and Arthur Harrison, is exactly that.

A 'cacophony oscillator' based around a single CMOS chip, the design falls somewhere between a synth, an effect and an experimental noise box.

Austrian musician Alexander Renner has been awarded the exclusive rights to build and market the design as a ﬁnished product, adding an audio input and preamp, a true bypass and various mod switches in order to create the Cacophonator II.

If the Cacophonator looks a little bit hand-made, that's because it is. SubtleNoiseMaker is a one-man operation. Despite the brutally utilitarian appearance of the raw aluminium case, the unit is clearly well built, with high-quality parts all round and a good solid feel to all the knobs and switches.

Our only gripe is that there are absolutely no clues about the functions of each knob or switch. It's understandable that the Cacophonator is intended to be an unpredictable device, but it seems unnecessary to omit such basic labels.

The unlabelled knobs and switches control six oscillators that generate square waves, interacting with and modulating each other in unpredictable ways.

The Cacophonator's two LFOs don't modulate oscillators or ﬁlters directly, though. Instead, they introduce ﬂuctuations in the device's power supply, affecting almost every aspect of the sound.

You won't ﬁnd a keyboard, MIDI control or USB connections on the Cacophonator. Instead, it's all about hands-on control, with three rotary pots to control oscillator frequencies, one for modulation, one for current level, one for speed and one for feedback.

A row of three-way switches allows different capacitors to be switched in and out of the circuit. As you turn knobs, the circuit changes from what the designers refer to as deterministic to stochastic mode. In less technical terms, things get a lot more random.

Cutting to the chase, if you're looking for predictable, controllable sounds the Cacophonator isn't a great choice. The unit generates everything from throbbing sub-bass to heavily modulated, digital-sounding leads, but as you turn a knob or ﬂick a switch it's incredibly hard to know what's going to happen to your sound next.

As a synth, the only realistic way to make the Cacophonator play in tune with the rest of your production is probably to sample it and loop, pitch shift and edit sounds until they ﬁt.

To make things a bit more predictable, it's possible to run external signals through the Cacophonator's audio input, allowing it to operate as an effect pedal.

Drums and percussion loops work surprisingly well, although synths and other pitched instruments tend to descend into wonky madness sooner rather than later.

The Cacophonator II is one of the craziest products we've seen for a while. If you're looking for a traditional device with clearly deﬁned controls and an easily manageable sound, you can probably already tell that it's not for you.

On the other hand, there's no denying the Cacophonator can make some great sounds; it's just that you might not necessarily be in control of them.

If you're willing to take that experimental risk, the Cacophonator is worth a look.