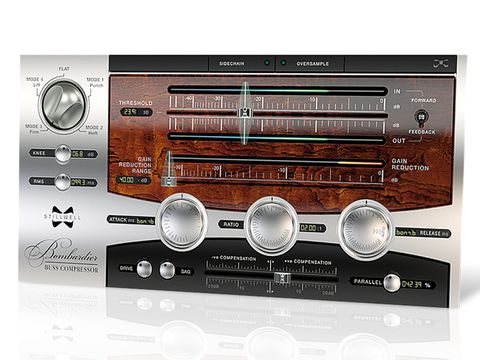 By its own admission, Bombardier is Stillwell Audio's most ambitious effort to date. Like most bus compressors, the goal is smooth, musical compression for everything from mixes and groups to solo instruments.

Rather than emulating one classic compressor, Bombardier brings together many desirable features, both new and old. Most significantly, its detector circuit can operate in either feedback (old school) or feedforward (modern) modes. Then, the sidechain circuit includes five detector modes.

These modes are known as Flat, Punch, Heft, Firm and Lift - four of which modify the detector signal. Punch emphasises high-frequency content, so that it pushes the compressor harder. The result is less bass dominance in the compression. Heft shifts the emphasis to the mid-range, while controlling high frequencies. As with Punch, bass pumping is reduced, but the mid presence is more dominant.

"Rather than emulating one classic compressor, Bombardier brings together many desirable features, both new and old."

Firm also pushes the mids, but high and low frequencies are less influenced by the emphasis curve, so the overall effect isn't as aggressive as Punch. Finally, Lift is a more traditional detector curve, de-emphasising the low frequencies (though not via a high-pass filter, as the manual points out), and leaving everything else unmodified. The result is reduced pumping without too much additional colouration. If this is all too much, use the Flat mode - it doesn't modify the detector signal at all.

To help achieve a smooth response, Bombardier also uses RMS rather than peak detection. However, for further flexibility, both the knee shape and the RMS window length can be fully adjusted.

As well as Attack, Release and Ratio controls, Bombardier has two auto-release modes (Slow and Fast) and Bomb, where attack and release are "effectively instantaneous". You'll also find external sidechaining, a parallel compression Mix knob and a Range control, enabling you to limit the maximum amount of gain reduction.

For more audible sound shaping, Bombardier has a post-compression Drive and a variable Sag control that further modifies the sidechain to give increased sensitivity to strong signals. There's also 4x oversampling, which increases the sound quality in exchange for an additional CPU hit, and you can tweak the knee shape.

With its dashboard-influenced graphics, Bombardier certainly looks the part, but the sound is what it's all about. Even at the basic default settings, lowering the threshold instantly reveals great responsiveness. In practice, switching feedback topology is also significant, and we found feedforward to be great for fast material (drums or picked bass) and more audible compression, while feedback proved better when general 'glue' was needed.

The RMS window size has a great effect on the sound, too. At minimum (0.1ms) and with fast release settings, you can turn Bombardier into a very aggressive peak-type compressor. But for the most part, the RMS setting adjusts its sensitivity to short transients, and getting this right is key to achieving a smooth response. The detector modes are subtle, taking a little getting used to (the manual is useful here), but once you know what to listen for, there's lots of flavour on offer, and the cryptically-named presets helps to put them into context.

The Drive and Sag controls add real character without being overbearing and act almost as 'mini compressors' in their own right. Sag offers a particularly tasty way to add further squashed character to drums.

Bombardier is an incredibly accomplished plug-in that goes beyond its bus compressor remit, and although its oversampling mode increases the CPU hit, we wouldn't be put off using it with this active all the time. At $59, it's also one hell of a bargain.

2. Drum kit: Starting in Heft mode and feedforward style. Lowering threshold for some compression and gradually changing the RMS window between its max and minimum settings to show affect on transients. Next, switching the oversampling in and out a couple of times to show difference (leave switched in). Then switching to the auto attack and release mode, reducing threshold further and limiting gain reduction to 8dB. Finally, introducing drive and sag functions to complete the effect and bypass to compare.

3. Acoustic piano: short classical piano part first with compressor bypassed, then with gentle musical compression in each of the detector modes - Punch, Heft, Firm and Lift finishing with the Flat mode. Spot the subtle differences in compression of frequencies, particularly low and mid range.