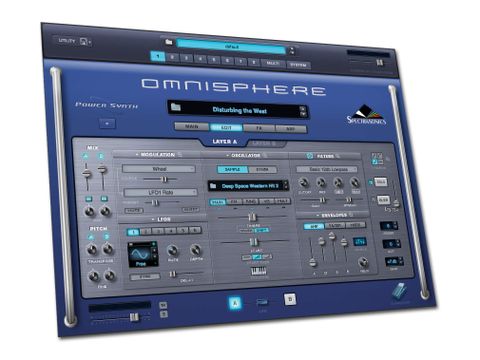 Great-sounding, ﬂexible and unique. What more could you want? Omnisphere was worth the wait.

The launch of Omnisphere sees the demise of Atmosphere, Spectrasonics' ageing pad synth. However, it's much more than a straight replacement.

At the heart of Omnisphere sits a 50GB sample library which supplies the raw data from which patches are created. Responsible for shaping these samples is the new STEAM engine, which represents Spectrasonics' new approach to sound generation.

STEAM has been six years in development and it's the system which will power all future Spectrasonics' releases. Like the SAGE engine which powers Stylus RMX, STEAM has been developed as an open-ended system which will enable Spectrasonics to develop plug-ins and instruments which can adapt quickly to changing operating systems and computer developments.

The raw sample data for Omnisphere was collected from Spectrasonics' team of sound designers around the world and it contains some extraordinary approaches to sound creation.

You'll find sampled light bulb filaments, instruments recorded in unusual settings so that unique ambiences are brought to the fore and, as you'll probably already have seen, a burning piano.

The result for Omnisphere users is an instrument with a sound that's liquid, shifting and unpredictable yet gloriously playable all at once.

Installation takes place via six DVDs, while authorisation is achieved via a challenge/response code and your serial number.

The first thing that greets you on start-up is Omnisphere's patch browser, from which you can choose sounds, either alphabetically, or via search criteria such as category, musical genre, or even via the names of the sound designers themselves.

As each patch is tagged with information relating to how it was constructed, this latter category is surprisingly useful, as you can soon learn the artistic approach of each designer and can then seek out the work of those you favour.

There are over 1,000 patches in total, which should keep you busy for a while. Once you've chosen a preset, you can close the patch browser, which takes you into the main Omnisphere interface.

The interface approach will be familiar to anyone with an existing Spectrasonics instrument, with each synthesis module incorporated into a 'metal' virtual rack.

Omnisphere dramatically expands on the synthesis options in Atmosphere: it contains a hugely ﬂexible engine which throws up unexpected delights at each and every turn.

The central section enables you to choose a source for each layer of a loaded sound, with samples rubbing shoulders with synthesis types including subtractive synth waveforms, FM synthesis, ring modulation and wave shaping.

A full patch will load either a sample or the relevant synthesis type onto both layers but you're free to modify these independently once in the Main Edit area. So if you like one half of a sound and not the other, you can make the necessary adjustments.

Once you've chosen the sound source of your choice, to the right you can activate the filter section, which offers variants in three categories: high-pass, low-pass and speciality. Below the filter type, cutoff, resonance, Key Follow and Envelope dials allow you to adjust your filter treatment, with a handy gain slider available at this stage too.

Below this, the envelope section provides tabs to let you adjust the amp and filter envelopes, while also allowing access to four modulation envelopes.

You can keep envelopes in simple ADSR forms, or expand their functionality, which is where the fun really starts. By clicking on the microscope button you can bring up an in-depth graphical display for the envelopes, which offer break-point, fully editable steps.

These can be shaped manually, one step at a time, or you can rely on the Chaos envelope designer to take control for you. The Chaos button randomly adjusts the curves and envelope steps to yield unexpected results, though you can restrict the amount and type of randomisation if you don't want something wildly off the scale.

Envelopes can be looped and synced to the tempo of your host sequencer, so you can achieved anything here from bubbly, filtered basslines to wild, eternally shifting soundscapes.

There are six independent LFOs with a variety of waveforms too, and as with all things relating to the Omnisphere interface, you can either keep things simple by setting up a single modulation routing directly in the main window or you can maximise the view to get an overview of all routings on a single pop-out page.

There are 24 routing options available for any patch and you can control which of the layers will be affected by routings you set up.

Spectrasonics has gone arpeggiator crazy in Omnisphere, with a powerful engine capable of taking any patch and sending it spiralling into tempo-sync'd madness.

There are 32 steps available for any sequence, with buttons below each step acting as on/off switches. A variety of modes let you decide whether movement will be chord-based, upwards, downwards, randomised and the like, while the range can be extended from anything from one to four octaves.

Clock is available from 1/1 to 1/32 notes, while a Length dial knob lets you restrict the note length of the sequence globally. You can introduce swing via another knob, which shifts the 'even' steps late, so that straight patterns can become progressively 'skipped'.

What's particularly impressive is that an independent arpeggiator is available for every layer of a multi, so if you have eight patches loaded simultaneously, they can all be independently arpeggiated.

Omnisphere's Effects section is comprehensive, as you have the opportunity to apply effects either to Layer A, Layer B or to the shared output, via the 'Common' tab. This means that up to 12 effects can be added to a basic patch, with plenty of options available within each effect type.

There is an assortment of EQs, three reverbs and a fine complement of delay variants. These sit alongside Spectrasonics' own weird and wonderful effects such as Tape Slammer and Tube Limiter.

There's amp simulation, too, which works wonderfully on many of Omnisphere's more organic waveforms, warming these up to create wonderful, earthy sonic hybrids.

The simplest page within Omnisphere is Main, which provides basic controls for a patch's most fundamental controls - the balance between its two layers and their relative pan positions, a short-cut to low-pass or high-pass filter types, plus settings for pitchbend range and velocity response curves.

Omnisphere is multitimbral too, allowing eight layers of patches to be played back simultaneously. To handle mixing duties in such circumstances, the Multi button at the top launches Omnisphere's mixer, which enables level balance between parts, plus set up and control of four auxiliary effects busses, as well as a mastering effects chain.

Additionally, a Live mode enables you to organise and assemble patches ready for live use, while the Stack button lets you layer your multi parts into an all-singing, all-dancing monster patch.

The possibilities are endless - just make sure you've got enough RAM and processing power!

Omnisphere is a phenomenal instrument. It shows what can be done when the power of real, unusual samples is combined with a powerful, multi-approach synthesis engine.

Omnisphere's STEAM is certainly that, and it also manages to provide users with an interface which is far from intimidating.

We have to applaud Spectrasonics for taking its time and getting this release absolutely right - from the onboard manual, to the video tutorial area on the company website, learning Omnisphere is painless despite its complexity.

Most importantly, however, it sounds extraordinary. It would be easy to dismiss some of the sound sources as novelties, but to do so would be a serious mistake. This is a set of 'real' sounds that can be manipulated in the richest ways.

A box office smash, without question.