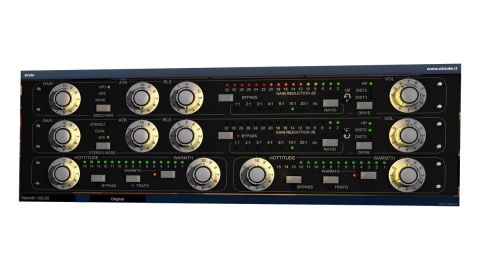 Not a perfect hardware emulation by any means, but Disto sounds great in its own right and represents fantastic value.

Italian developer SKnote has made a name for itself with unofficial recreations of high-end classics such as EMT's 250 reverb and Shadow Hills' Mastering Compressor.

The latest of which, Disto (VST/AU), takes on two Empirical Labs industry standards: the Distressor compressor and Fatso Jr tape saturation simulator. These bad boys cost around £1,300 and £1,800 respectively, so the appeal of a 40-buck plugin addressing both is obvious.

Disto's gorgeous GUI is divided between the two emulations, the top two thirds housing the distressor and the bottom third containing the Fatso. Each features two identical sets of controls, enabling stereo, mid/side or independent L/R operation for both units.

The Distressor section comprises a control- for-control recreation of the hardware. Four knobs set the (input) Gain, Attack, Release and (output) Volume, while the Ratio button steps through 1:1, 2:1, 3:1, 6:1, 10:1, 20:1 and infinity:1 ratios. The output Drive button has six possible states, applying one of three distortion algorithms with or without high-pass filtering.

There are currently two operational Modes governing the plugin's sonic character and dynamic response, selected from a dropdown menu at the bottom of the GUI.

Original mode is said to be modelled on the original hardware, while Out of Order mode is more extreme; but both are rather fiercely calibrated, with the plugin's controls jumping very sharply indeed from an unprocessed signal to a very heavily processed one with not much in between. SKnote says a third, softer mode is in the works, which should allow more subtle operation.

The Sidechain button switches between two levels of high-pass and band-pass filtering, for preventing bass frequencies triggering the compressor, and allowing vocals, guitars and the like to shine through.

The UK Mode button, taken from the Distressor's British Mode, is inspired by the famous engineering trick of pushing all four Ratio buttons of the Urei 1176 compressor in at the same time, resulting in a very particular response curve and a hotter, louder signal.

Fatso on a diet

That's where the strict emulation ends, as Disto's lower third incorporates just a couple of key controls from the Fatso Jr. Hottitude drives the signal hard, adding bags of harmonic character, while the Warmth control is almost worth the asking price alone, using a dynamic filter to progressively smooth the harsh top-end of anything you put through it. The Trafo button engages a virtual transformer, further colouring the sound (with low-end emphasis).

Disto has no presets, but with it being so easy to use, we don't feel so inclined to hold that against it, particularly. However, it does miss a wet/dry mix control, and the inability to disable the simulated analogue noise is irksome.

If we were to sum the Distressor hardware up in one line, we'd describe it as 'the sound of the Top 40' - and Fatso Jr, too, has graced countless hits. Disto isn't a flawless recreation of the two, but it really does offer a taste of a pair of classic pieces of hardware in a clever combination at a very low price.