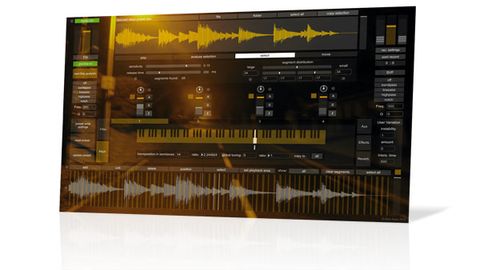 Generative 2's various foibles limit its appeal, but those who love obscure tools may find it diverting and even useful.

Like its stablemate Feedback 2, Siren Audio's Generative 2 is an (individually available) follow-up to one of the components of its Lorelei Suite.

It's another Max/MSP- developed standalone application designed for the creation of abstract, ambient soundscapes; but while Feedback 2 is based on a set of delay lines, this one's built on multiple granular synthesis-based "devices". V2 adds features such as separate pitch controls for each device, a new multieffects section, a global reverb, and manual segment editing.

In our review of Feedback 2, we criticised its lacking documentation and convoluted interface, and unfortunately, Generative 2 is even less approachable.

The manual fails to properly explain the underlying premise of the software or even how each section works in context. The hour-plus instructional video on YouTube helps a little, but it lacks any to-the-point explanation of the core functions. Getting to grips with Generative 2, then, is a frustrating experience, which is a pity, because it's capable of making some rather lovely sounds.

Here's how it works: you record or load in some audio (nine WAV files are included to get you started), which is then analysed by the software to detect "segments" (see Tangerine dream).

These are automatically divided up between four granular synthesis engines, each of which moves a virtual playhead between the segments at a rate dependant on various undisclosed factors at work behind the scenes.

The result is a dreamy texture that rolls on without the need for any further input - while you can use MIDI to control the positions of the playback heads and set the pitch of each device via individual Transpose and Ratio settings, for the most part, you're relying on Generative 2's randomness to create evolving soundscapes.

In addition to the granular synthesis engine at its heart, Generative 2 features a variety of sound-sculpting tools, including independent resonant filters on the input and output with low-pass, high-pass, band-pass and notch modes.

Each device also has four dedicated filters with nine modes - low-pass, high-pass, band-pass, band stop, resonant, all-pass, peak notch, low shelf and high shelf - and there's a master reverb and a multieffects section with two slots, each of which can host a delay, delay ramp (a delay with variable time but constant pitch) or distortion module. Each device has a single auxiliary send fader that controls the amount of signal sent to both effects, though, which is a little unusual.

Variations in speed and smoothness can be introduced to the movement of the playheads via the User Variation panel, and up to 16 "states" (ie, snapshots) can be saved and swapped between to 'morph' sounds and create more radical changes in timbre. Finally, the record mode renders the instrument's output to an audio file, for importing into your DAW.

Fans of the original Generative will likely be satisfied with this update. However, while newcomers will find its granular synthesis engine capable of producing some fantastic-sounding results, its reliance on random factors and insubstantial documentation make it suitable only for those who enjoy a more esoteric approach to sound design.