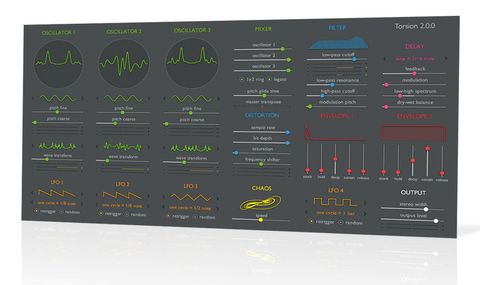 Version 2 makes Sinevibes' Torsion an even more appealing a proposition than it was already.

The most obvious change is the GUI, which has been redesigned to bring it in line with Sinevibes' current streamlined ethos. It's calmingly grey, covered in legending (making it much easier to use) and does away with the previous dotted-line controls in favour of regular sliders and text-based LFO rate descriptors. While the animated LFO wheels have been lost in the simplification process, at least the oscillator levels are now reflected in the waveform displays, which may be more useful.

The oscillators now each feature fine pitch control and three octaves of pitch modulation range, while the LFOs can be run at 1/48 rate and have a mad new trapezoid wave option. Perhaps the most significant new addition, though, is a pair of all- new effects modules.

Distortion is satisfyingly comprehensive, offering adjustment of bit depth and sample rate, as well as analogue-style saturation and a wicked modulatable Bode frequency shifter. Delay is similarly well-conceived, with the Modulation slider introducing chorusing, the combined low-/high-pass filter enabling a good degree of tail frequency shaping, and Feedback and mix controls onboard.

Just like everything else in the Sinevibes catalogue, Torsion is focused, quirky, surprisingly intuitive and genuinely different. It's perhaps not the most flexible synth in the world, but it sounds ace, particularly when put to work on "character" basses, leads and effects - analogue with a digital edge.