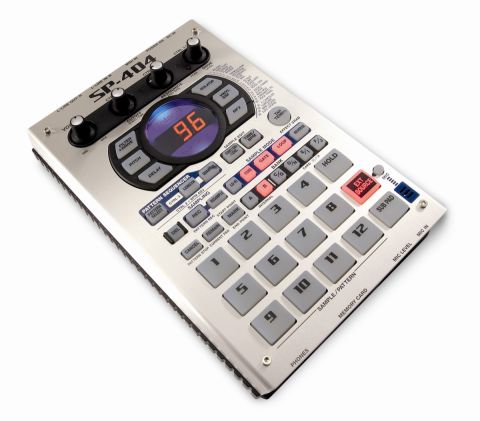 A robust sampler with great effects that´s perfect for a studio or live setup.

The SP-404 is primarily a sampler, but it lets you program up your samples into patterns as a sequencer does. Operationally, though, it's more in the style of the old-skool drum machines.

You can use 29 effects to wreak havoc on your unsuspecting sound files.

The shape and form owes more to a DJ mixer than anything studio-bound and the RCA phono connectors on the rear (for audio line in and out) ally it more to that world. Although you can't plug a deck straight into it for level reasons, you can happily connect it as an insert loop to your mixer, sampling the feed from the decks for your creative pleasure or simply adding effects to the external input 'on the fly'.

Alternatively, if you don't want to do any 'live' sampling and can get by with only one deck, plug the stereo output into one side of the mixer for crossfade action.

The SP-404 is a chunky beast with a metal surface and solid plastic base that's sure to withstand the rigours of stage use.

The big rubber pads and sturdy knobs feel like they'll cope with the continual hammering and twiddling of a late night jam session. They're also backlit, which, together with the large-scale LED display and blue pulsing metronome, makes working in low-light conditions a breeze.

Sample time for the SP-404 is five minutes at full bandwidth on the internal RAM (double that at low resolution), which includes the samples that come shipped with it. A very necessary CompactFlash slot enables you to expand this to up to 386 minutes (with a 1GB card) and the card samples can be spread across any of the eight sample banks, with two other banks assigned to the internal RAM.

There are 12 samples per bank, one for each of the 12 trigger pads.

Sampling is performed simply within the 404, using either the signal to the line input (from deck, CD player, iPod or whatever else is connected), the integrated microphone or a microphone plugged in to the mic input on the front. Start, end and level editing lets you refine the sample.

Alternatively you can import 44.1kHz AIFF or .WAV files directly from the CompactFlash card if you have a means of getting them on there in the first place. A sample can be looped or held to let you over-play other samples from different banks or add machinegun-style rolls.

Once you've got a bunch of samples together, go into Pattern mode and record them into quantised sequences. The only problem here is that the tempo isn't fixed for a pattern, so if you're using loops and switching between different patterns with different tempi, you have to find the old one again.

The great thing about the SP-404 is that you really do want to play with it: the way it's laid out, the big flashing pads, the control knobs - it's just asking for it. And once you get your heads around the distinction between sample and pattern playing, the rest is totally intuitive. The potential for it to be a highly expressive 'instrument' quickly becomes clear.

Throwing effects into the equation is simplicity itself and being able to resample with effects opens up new avenues of invention for the sonic adventurer. That said, we'd love to have seen a small ribbon slider up the side or even a small matrix pad (as on Korg's Kaoss Pad) that could be assigned to an effect parameter or two. It would really enhance the playability of things like the filter or scratch effects.

Nonetheless, the three effects knobs are spaced well for 'easy access' and they do the job.

The blue pulsing metronome light looks really good and gives you the necessary timing info visually, and the large LED display is unavoidable. That said, with only three characters, it's sometimes hard to understand what it's trying to tell you.

Sound quality is excellent (as you'd expect these days) and belies the lowly RCA connectors. A headphone socket on the front lets you practise in private or line up samples offline.

There are no giant leaps of innovation in the SP-404, but the new developments keep it comfortably ahead of its competitors. New effects, like BPM Looper and Sub-sonic, make the SP extremely DJ-friendly, and with the expanded sample time and CompactFlash capability, its playing horizons are broadened.

In the future, though, we'd love to see more expressive performance features, such as a tracker pad for the effects. And how about a USB port for linking to a laptop?

For the time being, though, this revision does the business, and it comes at a very reasonable price.