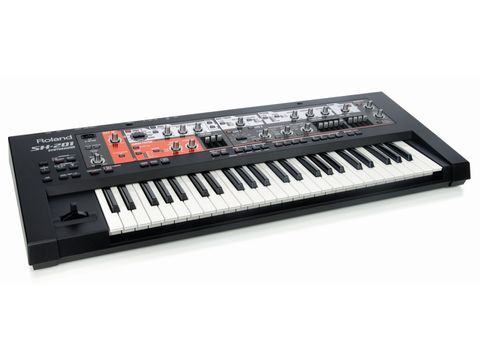 It sounds great, it's intuitive and it's appealing for those who are new-ish to synthesis. It's not quite a new SH-101, though.

The keyboard was two-and-half octaves long and the synth itself was monophonic. It was designed as a 'guitar-synth', so came complete with shoulder-strap and optional modulation attachment, which stuck out like a guitar neck.

The single oscillator featured Saw, Square and Pulse waves, PWM (Pulse Width Modulation) and a sub oscillator. The resonant filter was tasty enough and the usual elements could be modulated via the LFO and the envelope generator.

The list of 101 devotees could easily fill an entire article, so we'll plump for a select few - 808 State, Bjork, Future Sound Of London and The Prodigy. And that's just the tip of the iceberg.

So, how does the SH-201 match up? Is a comparison to its forefather even fair, or appropriate?
Synthesis

The architecture of the synthesis engine driving the SH-201 is a different kettle of fish to its aged namesake.

Here, Analogue Modelling is the weapon of Roland's choice, which as we all know by now means a digital process for manipulating analogue-style waveforms. These waveforms are Saw, Square, Pulse/PWM (so far so SH-101), plus Triangle, Sine, Noise, Feedback Oscillator, Roland's own Super Saw, plus connections for an external signal via the audio ins, more of which later.

Two oscillators are simultaneously available, which Roland chooses to call Tones. Once you've toggled between these to set both up, the signal is then passed to the filter section where the collective sound can be treated by a high-, low- or band-pass filter, at 12 or 24dB per octave. The filter also has its own ADSR envelope.

The am section then gives all this volume and shape, with an overdrive dial ramping in a little distortion alongside to taste.

The signal flow diagram engrained into the front panel fascia then points to the effects section, where you can add reverb or delay with controls to dictate a dry/wet mix and a Time setting, which effectively controls how long your effect sticks around for.

Underneath all this you'll find the two LFOs. Both enable access to a choice of seven waveforms (including the SH-101's sample and hold) and, like the oscillator section, a toggle switch between LFO1 and LFO2 enables you to keep tabs on the separate settings you choose.

To the right, you'll find the LFO destination routers, which let you choose the targets for your modulation and the relative amount of mangle.

Not surprisingly, this range of tools means the 201 is capable of a great range of sounds, from raspy basses through delicate pads to bubbly sequences and searing leads. In fact, the SH-201 is such a joy to play with you should prepare to miss meals, social engagements and your gran's birthday as you get lost in the fun of using this synthesiser.

By now, the purists will be tugging nervously at their shirt collars and trying to keep cool. Is this really an SH for the 21st Century?

Well, yes and no. It's true that all of the characteristics of the SH-101 are featured within the architecture here, but that's also true of nearly every subtractive synth of the past 20 years.

Our advice is to look beyond comparisons in the same way that Jupiter-8 users had to when Roland released the JP-8000 in the mid '90s - it's a great synth, but a different synth.

Roland is also encouraging you to think of the SH-201 as a potential signal processor, as the phono-jack stereo ins on the back-panel enable you to connect up your gear and then start feeding it through, well, anything you like really.

The oscillator stage enables you to pick 'audio in' as an option, and once you have it follows the same signal flow described above. The choice of phono ins is interesting and will alert DJs particularly, as this means that you can connect your decks (or even your iPod) with minimum fuss.

A dedicated Audio Filter lets you cut to the chase if this is what you're after, while a Notch filter setting is added alongside the other, more regular options in this section.

Whether you're processing external audio or the internal sounds, however, Roland also encourages you to see the SH-201 as a performance tool. With this in mind, its theremin-inspired D-Beam controller is present, along with an arpeggiator and a phrase recorder, which, when activated, captures knob movement, so you can easily start building evolving phrases.

The 201 can sync either to MIDI clock over USB or set an internal tempo for phrase sequencing of this kind.

Roland says that it's trying to "put the fun back in synthesis" with the SH-201, and it's succeeded. There's nothing radical here; it doesn't reinvent the wheel, but it does offer a depth of sound and range of functions that will see it find a home in plenty of studios.

The immediacy of grabbing any sound by the scruff of the neck and getting busy with it is so much fun and so intuitive that you should definitely have a look if you're planning to spend £500 on some new hardware noises.