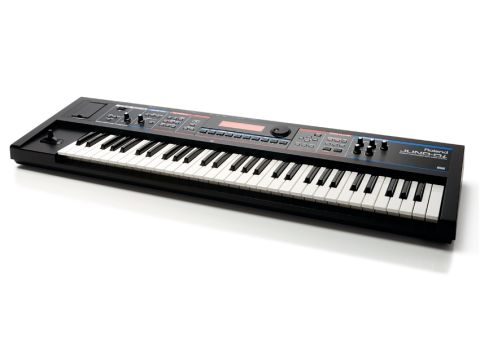 The Juno-Di is deﬁnitely one to check out if you're on a budget and need a workhorse keyboard.

The Juno-D was the first in the newly resurrected Juno line when it was launched back in 2005. Aimed at performers and producers wanting portability and a great base of versatile sounds for a reasonable price, the Juno-D proved popular.

Never one to rest on its laurels, Roland has sought to improve and expand where the Juno-D left off, and for 2009 it brings us the Juno-Di.

Plenty of important areas have been upgraded and improved since the Juno-D. The latest Juno's polyphony has doubled from 64 to 128 notes, and the number of presets has increased from 640 to over 1,200 (user patch memory remains at 128 patches).

Wave memory has been doubled too, from 32MB to 64MB, and a song player has been added for playing MIDI files and for playlisting/running WAV/MP3 files from the newly included USB memory port.

On top of these changes, there's also a jack mic input with a dedicated reverb (eight types), an onboard vocoder (which sounds decent), the ability to power from batteries (using nickel metal hydride batteries), more drum kits and rhythms, expanded effects and more performances (now with splits and layering).

While all the above improvements are very worthwhile the general feel throughout the hardware doesn't instil the greatest of confidence, though we fully understand that Roland has had to cut some corners to bring the Juno-Di in at this price.

For a start, the keybed is too stifﬂy sprung for really sensitive playing. Then there are the dials, which have some sideward play, and the fairly cheap plastic used for the case/underside.

We don't want to be too harsh, however, as this is a budget instrument (and there are keyboards that cost significantly more and have wobbly encoders!). In its favour, the Juno-Di would make a great studio keyboard and is very light, weighing in at 5kg (11 pounds). You can pick it up easily with one hand, and there aren't many boards around with the Juno-Di's capabilities that are this portable.

In the centre of the front panel is the easy-to-read orange display. Patch selection is a doddle - simply press the Category button, then scroll through using the wheel. You can also save your favourite 100 patches for instant and easy recall. The front-panel layout is easy to navigate and is well suited to live performing.

Available performance controls include the D-Beam (for air-controlled expression of sounds) and the Envelope and Filter dials. New to the Juno-Di is the Mic/Mode section.

Here you can set the Gain for the microphone (for vocoding or singing along to your USB key backing tracks or iPod fired through the mini-jack input), set the eight types of reverb for the mic input, enter the Patch Edit mode for rudimentary editing of basic parameters (pitch bend range, patch level, FX selection/levels, portamento and poly/mono mode) and enter MIDI Controller mode for using the Juno-Di as a control surface.

Up next are the keyboard modes. Split allows a different sound either side of a user-defined split point, Dual allows two sounds to be layered and zoned, while Super Layer allows one sound to be layered up several times and detuned for super-phat sounds. This is particularly useful for making three or four oscillator monosynth patches.

Of course, no contemporary keyboard is complete without an arpeggiator; the Juno's is pretty decent, with 12 onboard modes. There's a nifty chord memory function too, for single-finger triggering of chords. Select Pop (for example) and the Juno-Di will provide you with a set of appropriate Pop-style chord voicings. Definitely handy for the solo performer.

Sound-wise, the Juno-Di is no slouch. It's filled with plenty of very usable, wisely chosen sounds that can be employed for most styles - and let's face it, this is just what you want in a budget synth.

Though the sounds won't set the world on fire, they are good-quality and with a little tweaking (using the front-panel envelope and filter controls) can be edited easily for the required purpose. There are some nice pianos and electric pianos, expressive solo synths and pads, workhorse acoustic guitars and basses, lush strings - you name it, it's onboard.

There's a useful array of effects available onboard the Juno-Di. There are three processors - a main reverb generator with five types, a main chorus generator (with two chorus effects and a delay effect) and a master FX unit with 79 available effects.

The quality of these effects is good in general, with some nice choruses, amp sims, delays, EQ, reverbs, modulation effects and a pretty good vocoder. They aren't top-class, but they are very usable and versatile. This is particularly true when you factor in the patch editor, which makes many more controllable parameters available.

The editor is very easy to use. Each section (common, filter, amp and so on) is listed on the left-hand side, and it's simply a question of moving sliders until you get the desired sound, then saving the resulting patch and sending it back to the Juno using the onboard USB connector.

For an all-round package, the Juno-Di is hard to beat at its price point. Though the hardware definitely feels budget, the onboard sounds are better than we expected. Coupled with the useful external editor, the 79 onboard effects, a usable filter, a song player, split and layer capability and a no-nonsense interface, there's some serious scope available.

In short, the Juno-Di is a versatile, portable and affordable workhorse keyboard.

Listen to the Juno-Di in action: