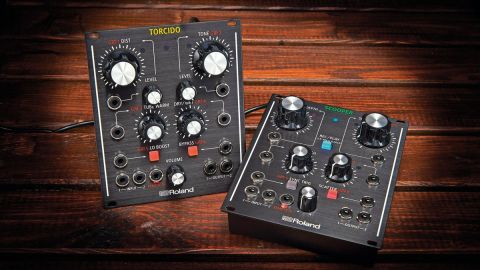 A small and flexible processor that goes beyond what some simpler units can do.

Today we're running the rule over the Scooper.

None of this is explained in the semi-generic two page owner's manual - in fact, nearly everything about using he init is given only a cursory explanation. We understand that digital kit updates often push manuals out of date pretty quickly, but Roland's approach certainly doesn't help you get the best out of a new box of tricks.

Scooper is a decidedly digital effect that takes the Scatter effect found on the TR-8 as its starting point and combines it with an audio looper. The basic workflow consists of capturing an audio loop and then playing it back with rhythmic glitching courtesy of the Scatter engine.

You can adjust the Scatter type and depth, re-pitch the loop and apply low or high-pass filtering. The central button starts recording or playback, but more accuracy can be achieved in tempo critical situations by using the 'Sync Trig' input. One of the custom modules - MIDI Clock To Gate - can also be useful here.

The latest update adds an overdub feature, but this doesn't get away from the fact that only what is recorded gets processed. A fully live glitch/scatter processor would perhaps have been more useful for some.