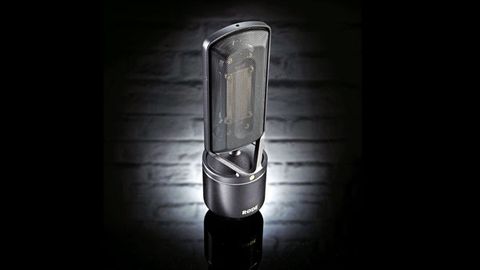 A fresh take on ribbon mic design, the Rode NTR has many practical applications.

They might have had their heyday a long time ago but ribbon mics have become increasingly popular over the last few years. A ribbon mic is based around a very thin and very light ribbon of aluminium that is suspended at both ends in a magnetic field.

The ribbon responds to subtle variations in sound pressure and, as both sides of the ribbon are equally exposed, usually has a figure of eight pickup pattern, rejecting sound from the sides.

Traditionally ribbon mics have needed no power supply and produce a low output voltage so need a suitable high-quality preamp to bring the level up.

Rode's new NTR, though, the Australian company's first foray into ribbon territory after a long and successful line of condensers, breaks with tradition. In fact, Rode says that the NTR, "Addresses common criticisms of other ribbon microphones, while opening up the possible usage scenarios considerably."

Rode tells us that every element of the NTR, from the transformer to the ribbon element itself, has been designed and created in-house, and that the ribbon, at 1.8 microns, is one of the thinnest in existence and has been laser cut (unlike the manually cut ribbons of many manufacturers), eliminating microscopic frays along the edges that could decay over time, which should give it more longevity.

That longevity will doubtless be helped by the fact that Rode have equipped the mic with an easily-operated Travel Screw to secure the sensitive ribbon in place when not in use. They also offer one free ribbon replacement during the ten-year warranty period.

Electronically, the NTR is active, running from 48V phantom power and has a built-in transformer that offers a high output so that the mic is not so finickity about preamp requirements as other ribbon mics and can, a fact borne out by our tests, be used with a wide range of preamps without having to turn the gain up to noise-generating levels.

While it doesn't come in a wooden box or aluminium flightcase, the NTR's cardboard foam-lined box is classy enough to store the mic safely in a studio cupboard.

Internal shockmounting results in there being no need for an external suspension cradle, which helps with placement, and, even though this is quite a heavy mic, the included compact mount which attaches to its base works great at holding it at any angle on a mic stand with little pressure needed to firm it up.

On a variety of sound sources we found the mic to deliver a very natural representation of whatever was put in front of it with plenty of low-end and a clear top with a natural roll off, rather than the often overdone brightness designed into some condensers.

Of course, being figure of eight, the mic also picks up what's behind it and this can work to your advantage if the sound of the space you are working in is right for your recording. If not, using it in a dead-sounding booth or with some damping material placed behind it pays dividends if you are, say, looking for a more intimate vocal.

On that score it's worth mentioning the mic's strong proximity effect which can be worked for a richer vocal texture. Something else that can be worked is the mic's null points where the extreme rejection from the sides can come in handy, reducing bleed from other instruments.

Besides vocals, we used the mic on acoustic guitar and on a guitar cabinet with great results and, had there been a drum session to use it on during the review period, we would have been happy using it in front of or over the kit or as a room mic.