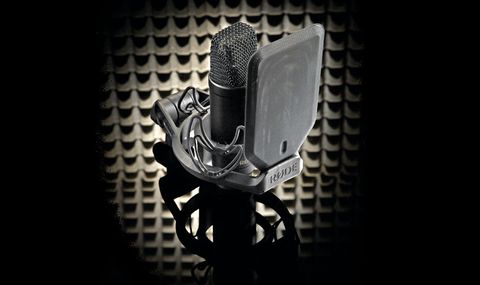 Great performance from an affordable large diaphragm condenser for vocals and more.

Rode's original NT1 was released around 16 years ago, followed by the NT1A a few years later. Now the company has gone back to the old name with a just-released new NT1 model that looks very similar to the NT1A but has actually been completely redesigned from the ground up, the only component in common with the NT1A being the mesh grille.

So, what does that redesign involve? First up there's the new HF6 capsule, designed to feature a sound signature similar to vintage favourites but exhibiting extremely low noise. Then there's the fact that the transducer is suspended inside the microphone using Rycote's Lyre system, which should minimise external vibrations. Rode also claims that the NT1 is the world's quietest 1-inch cardioid condenser due to the high-grade electronics keeping the self-noise level down to 4.5dBA.

With no switches for bass roll off or a pad, the NT1 comes across as a businesslike, clean design finished in a very dark grey. Rode tells us that the machined aluminium body is nickel-plated for resistance against corrosion and coated in a military-grade ceramic layer that will make the whole finish resistant to scratches or marks. The black outer mesh basket seems tough and protective, while a small gold inlay clearly indicates which side of the mic to aim at the sound source.

Included in the package is Rode's new SMR shock mount, which features a unique double-Lyre suspension system, the second Lyre acting as a tensioning element to maintain each Lyre in the optimum position for cancelling vibration.

The microphone sits comfortably in this, held in place by a screw collar at its base with angled adjustment of the whole shebang in relation to a mic stand carried out by an easily-turned lever that doesn't need too much pressure to keep everything firmly in place. An all-metal pop rectangular filter that slots into the cradle about 5cm in front of the mic is also provided.

Initial thoughts after plugging in the NT1 were that noise is indeed very low - Rode's redesign seems to have yielded results here. Now, we reckon that most people in the market for a mic of this type would have vocal recording in mind and they wouldn't be disappointed.

The NT1 vocal sound is crisp and detailed with plenty of warm low-end body, nothing missing or exaggerated in the midrange and an airy clarity in the top end, plus the included double-meshed pop shield does a great job and conveniently sits unobtrusively exactly where you need it.

Vocals aren't the only job though - the NT1 could lend itself to a host of tasks, although the lack of a pad could preclude it from close micing some very loud sources.

We got excellent results recording both six-string and 12-string acoustic guitars where the top end silkiness was crucial and also on various items of hand-held percussion and, although the opportunity didn't arise during the review period, would have happily used it as a drum overhead or on piano.

A decent large diaphragm cardioid condenser mic should be high on the shopping list for anyone who wishes to primarily record vocals and this new NT1 is one of the best we have heard in the reasonably affordable price bracket. At a street price just north of £200 for the mic and an excellent pop shield we have no complaints.