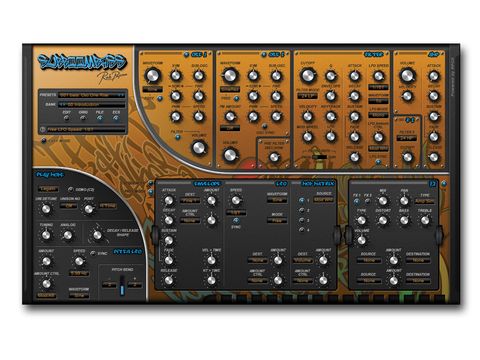 SubBoomBass has got more to satisfy bass hounds than most synths and is particularly suited to urban styles.

Rob Papen's first three soft synths - Albino, Blue and Predator - were of the general purpose virtual analogue variety, but the last one we looked at, RG, was decidedly different, being a sample-based "rhythm guitar synth".

Rob's latest offering, SubBoomBass, also aims to be less generic than your average VA, being billed as a "dedicated bass synth".

SubBoomBass is built on the engine of Rob's beastly Predator synth and, while it lacks some of the features of its progenitor, it has a few nifty extras to make up for it, plus an eye-popping, opinion-dividing interface (we rather like it).

Sound generation begins with the synth's pair of oscillators, and these are the biggest selling point of SubBoomBass. For starters, they offer 16 of the same analogue-modelled waveforms as Predator: you'll find staples like sine, saw, square and triangle, as well as combination waveforms, noise generators and some with a 'Rez' tag, which are useful for accentuating filter-work.

Further oscillator functions include tuning; free running or reset-on-note; sync; ring and frequency modulation; keyboard-tracking disable; symmetry (similar to pulse width, but can be applied to any modelled waveform); pulse-width (ie, symmetry) modulation; and a Sub-Osc knob per oscillator, to bring in a sine or square wave an octave below the note played.

More unusual are the 39 sample-based waveforms that are unique to SBB. These have been created by pitching down samples of various instruments, mostly of the percussive variety, with sources including kick drums, toms, xylophones, congas, djembe, bass guitars, etc. You can even use the sync and ring/frequency modulation with them, for extra grind and growl.

Following the oscillators is a simple distortion stage - you can drive the signal to warm it up, or slam it to create new timbres - then a dual-filter setup, running either in series, parallel or split mode (ie, a filter and effect for each oscillator).

The first filter has low-pass, band-pass, high-pass and notch modes in 6dB, 12dB, 18dB and 24dB flavours, as well as comb and vowel filters. It also has a dedicated envelope and LFO with various waveshapes and tempo sync - the LFO is handy for making wobbly bass noises, and the phase can be reset on each new note.

The second filter is simpler: it has low-pass and high-pass varieties in 6dB, 12dB and 24dB modes, a cutoff knob… and that's it.

The amplifier section uses the same ADSFR envelope as found in the filter and modulation sections. The F stands for Fade, and enables the user to specify that instead of holding the signal at the sustain level following the decay stage, it will instead rise to 100% (or fall to 0%) over the specified time period. Nifty!

Two panels at the bottom of the interface conceal further options. The central panel can display either the step sequencer or the Free Mods section, which offers a further envelope and LFO to be assigned to parameters of your choosing, plus a four-slot mod matrix. A neat touch is the Amount Ctrl knobs for each modulation, which, like all SubBoomBass knobs, offer MIDI Learn via a right-click menu.

Moving on to that step sequencer, the Tie, Slide, Tune and Velocity rows can be used to enter one-key basslines, complete with slides and rests, etc. You can play in a tune step-sequencer-style, via your MIDI keyboard, too.

There's a Free row for modulating parameters of your choice within the synth via the Free Osc panel's Mod Matrix. Most novel, though, are the rows labelled Osc1 and Osc2 - with these, you can change the waveform of either oscillator on the fly to radically alter the timbre as part of a sequence.

General features include adjustable swing and glide time, latch (like holding a sustain pedal), locking of the sequence (so that changing presets doesn't trash your carefully crafted pattern), plus setting of the number of pattern steps and the speed (from a quarter to four times the tempo).

As cool as the sequencer is, it only has 16 steps, and you can only have one sequence per patch. It's a shame it doesn't work in a similar way to Rob Papen's RG, where, say, one octave of the keyboard can be used to switch between several sequences. That's not to say it isn't useful - the JoMal preset bank uses it to superb effect - but that it's best used for rhythmic motifs, rather than programming riffs.

Global goodies include a unison function that lacks the per-oscillator spread of Predator, but has the advantage of additional octaved unison modes; a knob for adjusting the envelope shape (logarithmic/linear/exponential); analogue drift emulation; portamento; and a pitch LFO.

There's an optional Easy mode, with a reduced set of controls - omitting fundamentals such as oscillator levels, although it's adequate for tweaking presets. Speaking of which, there are hundreds of quality presets.

So how does SubBoomBass fare as a bass synth? It's capable of a broad array of cone-shaking tones, ranging from highly synthetic to more organic, thanks to those built-in samples. The latter are ideal for hip-hop, R&B, etc, and it's not hard to imagine SubBoomBass being a go-to instrument for producers of these styles. It's also a fine general purpose synth for pads and leads.

However, there's no escaping the fact that those sampled waveforms are about the only thing that defines this as any more of a bass synth than Predator (it's basically a cutdown version of it). While there's no formula for devising bass synths, we still feel that there are areas in which SubBoomBass could be more conducive to making bass sounds.

For instance, for the common technique of layering a rock-solid, pure sub tone with a complex, effected mid-range sound, you'd have to use the Split mode… but then you've only got one oscillator, one filter and one effect for each part of the sound, which isn't much.

A dedicated monophonic sub-bass oscillator that bypasses the effects, main filter, etc, would be perfect here, and is the kind of feature that would add credence to the 'bass synth' tag.

Furthermore, since the unison mode is global (ie, you can't make an oscillator exempt from it), it can cause wavering bass levels. And the chorus has a low-pass filter but no high-pass (the latter being the norm for a 'bass chorus').

Grumbles aside, we can't deny that this is a quality instrument that dishes up some thunderous, high-calibre bass tones.

Give SubBoomBass a listen: