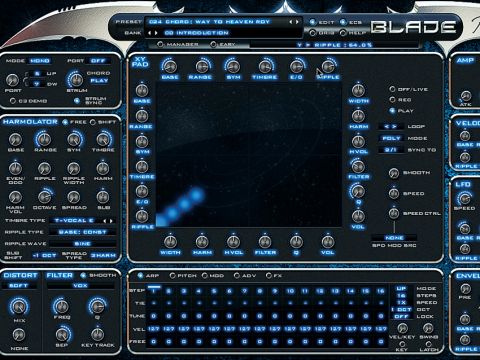 Rob Papen's take on additive synthesis has some clever tricks up its sleeve and does the business sonically.

Has additive synthesis become the hipster darling of the music production world?

You might think so, were you to tick off all of the variations on the technology currently available. Developers seem hell-bent on simplifying the technology, bringing users its uniquely rich sounds without the headaches traditionally associated with additive instruments.

Rob Papen and Jon Ayres' newest brainchild, Blade, represents a different approach to additive synthesis. Ayres is certainly qualified forthe job: his killer additive synth, ConcreteFX Adder, championed the now-familiar approach of offering a set of individually adjustable partials that could be grouped together and then modulated en masse via envelopes, LFOs and so on.

That seemed simple compared to 'true' additive instruments, which provide pitch, phase and amplitude envelopes for each of dozens or even hundreds of partials. This time around, the concept has been streamlined further.

Similar to other recent additive synths such as NI Razor and Image-Line Harmor, Blade entirely sidesteps the concept of adjusting loads of individual partials (akaharmonics) in isolation. Instead, you get an oscillator section known as the Harmolator.

This provides a dozen controls that access the most important aspects of the additive engine, affecting the harmonics in sweeping swathes of sonic manipulation. It's aninteresting take on the technique, and one that's in keeping with Papen's desire to provide inspirational music software.

Blade comes in AU, VST and RTAS formats. 32- and 64-bit versions are offered for both PC and Mac (with the exception of RTAS, which isn't available in 64-bit for OS X). An AAX version is also in the pipeline.

The GUI is large and tightly packed with loadsof (rather small) knobs. It's a tight fit, to behonest, and a little crowded with so many parameters to tweak.

A tabbed area in the lower middle section helps with this to some extent, providing access to all the things that didn't fit on the main display - effects, modulation, pitch controls, an 'advanced' page offering control over envelope curves, velocity, and so on. As thisis a Rob Papen synth, the sophisticated arpeggiator is front and (bottom) centre by default, topped by a massive X/Y controller.

The difference (in the) engine

The Harmolator is the source of Blade's power, and it's the equivalent of the analogue oscillator section in a traditional subtractive synth. It's designed to take the hassle out of additive synthesis, though some knowledge of how it works will go a long way towards creating sounds with any sort of intent.

There are controls for Even/Odd harmonic levels, Harmonic Vol, Timbre and Base frequency. There are some new things in here, too: Ripple and Ripple width, Sym and more.

All of these provide easy, global control over the typical additive functions that lurk just beneath the Harmolator's surface. You can also choose from various Timbre and Ripple Types, and add a sub-oscillator.

The 16 Timbre Types determine which partials will be present. The Base frequency determines the frequency of the fundamental, while Range affects the width of the harmonic spectrum by determining how many partials will be affected relative to Base. Symmetry weighs the spectrum to lower or higher frequencies, and Ripple creates peaks in the harmonic spectrum.

While Blade can't replicate, say, a complex acoustic sound with the detail possible with traditional additive synthesis, it gives you easy access to the most important aspects. Blade makes quick work of the sorts of shimmering, digital tones that only additive synthesis can create.

Once you've gotten past the Harmolator, you'll find a familiar virtual analogue-style synth engine, including a fully loaded distortion section and a multimode filter with no less than 14 filter modes (expect several low-pass, high-pass and band-pass varieties, along with vocal and comb modes).

The envelope generators are fairly standard five-stage models (ADSR plus Sustain Fade). Amp, pitch and the Harmolator get dedicated EGs, while two others are freely assignable. The Harmolator's envelope benefits from an extra Pre stage that delays the action.

Pitch and Harmolator both have dedicated LFOs, and there are two free LFOs to work with as well. There are six different waveforms to choose from, and tempo sync is an option.

Typically for a Rob Papen synth, Blade comes with an arpeggiator that can act as a mod source. It'll sync to host tempo, and it can be latched and have swing applied. It can also be used as a mini step-sequencer - a welcome option for those of us tired with the same old
up/down arpeggiator patterns.

Another equally effective modulation source is provided in the form of an X/Y controller. This has routing knobs so that it can be sent to all ofthe Harmolator's functions, as well as filter cutoff and volume. You can program its action or record your own path in real time, and playback can be looped and locked to tempo.

There's much more to Blade than we can cover in the space we have here, of course. It will come as no surprise to learn that the synth has two effects processors built in, each loaded with plenty of options. And, as a Papen product, you would rightly bet that it is weighed down with a ton of stellar presets (though there are some real stinkers in there, too, it must be said).

It all adds up to an instrument that excels atevocative, evolving soundscapes. If you like deep, moving pads or wild wobbulating effects, this is the place to find them, and Blade will be ofparticular appeal to those who are growing weary of the same old virtual analogues and sample-playback instruments.

If, however, you're after the absolute control offered by afull-on additive synth, you'll want to look elsewhere. Blade is about cutting through the academic minutiae and getting the job done - and that it does very well indeed.