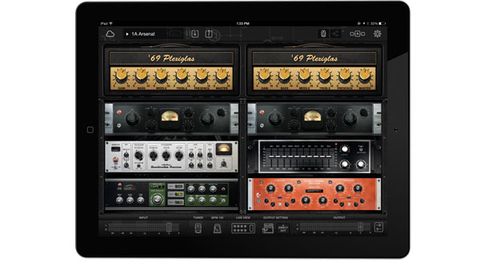 Quality amp and effects app for your iPad that's packed with tonal options.

While the plug-in version for computer DAWs is released later this year, for now, it's the iPad version that has been released first, in a similar way to how the original Bias amp designer (now called Bias Amp) was rolled out.

Where Bias Amp offers amp simulation only, Bias FX in some ways has more in common with the company's JamUp multi-effects processor, which has always offered amps and effects.

However, the company says that this new app is a different beast, designed from the ground up with the emphasis on professional sound quality using its latest algorithms.

Bias FX offers a full dual-path guitar signal chain derived from models of 12 amps, 25 effects pedals and five rack processors. There's also full integration with Bias Amp, which means that you can import any Bias Amp amp models and move any of the 12 Bias FX amp models over to Bias Amp for the detailed editing/amp building that it offers.

Using very clear and detailed graphics, Bias FX offers two main viewing options: one showing the signal path, the other a pedalboard. It's easy to move pedals and amps around and add/delete them from the signal path with drag-and-drop moves.

Adjustment of any parameters is easily carried out by tapping on any pedal to maximise its size and then just swiping your finger along to move the knobs. Dual signal paths with two amps running in parallel are easily set up with a 'Splitter' modules at one end of the parallel path and a 'Mixer' at the other to set up wide stereo sound if desired.

Your sounds are stored as presets in banks of 32 and you get one factory preset bank and any amount of user banks. The content of those banks can be expanded by taking advantage of Positive Grid's ToneCloud, an ever-expanding user library of edited virtual pedalboard rigs to be shared.

Using headphones for practice or recording (with Bias FX inserted into a DAW app) is an obvious role, but there are various options to optimise the output sound to suit a guitar or power amp. This makes live use a possibility, especially as there's MIDI control and a Live View mode for recalling presets and toggling effects with a single tap.

With a nice variety of amps and just about all effects genres represented with some based on classic pedals, Bias FX gives you a great set of tonal options if you want to get into iPad-based guitar playing/recording.

For those who may have already bought Bias Amp, it's a very practical Bias add-on, bringing a complementary set of effects for a fuller tonal palette.