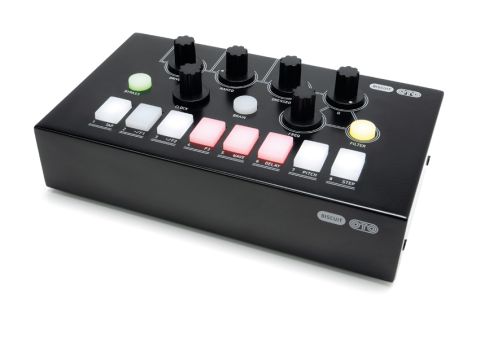 Little black boxes such as the OTO multi-FX box tend to have an alluring mystique about them, which gets heads turning and makes ears tingle. Especially when they're elegantly designed and offset with bold lighting and minimalist graphics.

The first three dials on the top row are labelled Drive, Naked and Dressed. While the former is self explanatory, the latter two set the volume levels of the dry and 8-Bit effect signals.

In practice, the Drive knob needs to be turned a few degrees before you can hear the effect - even if the Dressed knob is on full. The drive stage provides analogue saturation via diode clipping, so you can dial up some gentle warmth or ramp it up a bit for some extra crunch and fizz. Either way, the drive stage boosts the effect level so it can become way louder than the dry or bypass levels if desired.

When you hit the Bypass button, its green light goes dim and the whole circuit is bypassed. In this mode, the volume is fixed and the Naked dial has no effect on the dry signal.

The first-stage of signal processing are the 8-bit converters. The conversion adds a bit of background noise to everything passing through the box, and is what you'd expect. Next port of call is the effects section, which gives you a choice of four effects: waveshaper, pitch-shifter, delay and step filter.

"Things can get pretty crunchy and edgy with the waveshaper engaged."

The filter has been specially tweaked to complement the bitcrusher effect. In contrast to the wave smashing, the filter just oozes creamy goodness. The tri-colour Filter button toggles between low-, high- and band-pass types, and there are knobs for cutoff and Q.

As a bonus, there's a nice little eight-step sequencer that can control cutoff too. You can change the number of steps as well as the speed and there are three playback modes - forward, alternate and random. The step filter leads to some old-school fun, but it's not possible to manually sweep the cutoff with it running.

Only one effect can be used at the time; turn it on by pressing the Brain button, and program using the bottom row of buttons. It takes a little bit of memorising to remember what button controls what function at any different time, but the lights give a bit of visual feedback which helps keep track of things.

The waveshaper is our favourite, and things can get pretty crunchy and edgy which this is engaged. The digital delay can be set manually or synced to MIDI clock, and you can tweak the feedback time and tempo using the Clock Rate knob. We're not sure how useful it is, as it omits the original signal and there is no wet/dry mix. The pitch shifter spans one octave up and two down, but lags behind by a few milliseconds so drum loops will lose timing. It does work really nicely on silky strings to add extra harmonies via the 3rd, 5th and octave settings.

Many of the effect parameters can be edited using the Clock Rate knob. Because of this assignment, you can't change the clock rate until you deselect the effects altogether.

The manual describes the art of modifying the 8-bit status of the signal as Biscuiting. The effect is controlled by the row of eight rubber switches - these represent each of the eight bits and have three positions. White is normal, red inverts the bit and off mutes it. It's easy to experiment by randomly tapping buttons, but we found that the texture doesn't vary so much, more the loudness or intensity.

The idea of using the buttons to drop the bits in and out is fun and visually stimulating, but in practice, we found the simplest settings most useful. The effect is virtually identical when all the bits are either red or white, while the in-between mixtures didn't provide much of a variation in tone and texture.

"The Biscuit will have no problem making your Moog sound like a Nintendo, should that be your wish."

If you like a particular button combination, but fear that you won't remember it, you can store it in one of the eight memory slots called snapshots. It's worth noting that the eight snapshots are independent from the preset save function, which saves the parameters of all the effects.

The Biscuit speaks enough MIDI to ease its way in to a studio setup. All the pots, switches and buttons send MIDI CC messages and, in return, the effect settings can receive those same CCs via the In and Out ports on the rear. You can sync the internal step sequencer to MIDI clock and preset storage is handled via SysEx dumps as are firmware updates.

If you are looking for a genuine lo-fi processor, you've got it from the get-go here. It's one of the few devices in its class which is stereo, and probably the only one which combines all these features in one place. The crushing and filtering are both very useful to have, but the added bonus of effects and waveshaping give it much more textural variety.

The lo-fi quality is boosted by certain sonic unpredictability when combinations of bit-verting and wave shaping are induced. If anything is certain, this box will take your pristine audio and subvert it into a plethora of digital grains, and it will have no problem making your Moog sound like a Nintendo, should that be your wish.

There's no denying that this is a high-quality construction, with the knobs being some of the sturdiest we've used. The filter cutoff and sample rate dials have a bit more space around them, as they are undoubtedly going to get the most use. Our one suggestion would be to have an extra endless rotary knob for controlling the effects separately from the clock rate. This would avoid parameter jumps, and free up the clock knob for live tweaking.

Listen to what the Biscuit can do: