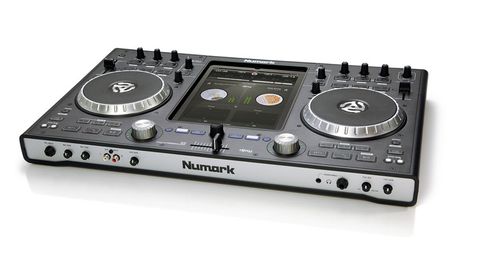 A niche product, perfectly implemented. Shame about the 30-pin, but iPad owners should take this seriously.

Algoriddim's Djay software has found a new home and audience on the iPad, with its app winning multiple awards and even showing up during Apple's iPhone 5 keynote. We love it for its effective simplicity and, when controllers like Numark iDJ Live and Vestax's Spin began to support the app, it began to transform itself from a fun, quick mixing tool to a bona fide bedroom DJ solution.

Numark agrees and its epic iDJ Pro is the app's biggest accessory yet, mirroring a lot of Numark's NS-series stylings, but with a pad-shaped hole in the centre.

At first glance, the iDJ Pro seems like overkill. There's no USB port so this is for iPad and iPad only and, bearing in mind its size and price, it might feel like over-investing in a fad. But once you get your hands on it, the iDJ Pro is just as solid as any controller on the market.

You might expect some corners to be cut considering the more 'consumer' market this might be aimed at, but it's not the case - the jogs feel as good as any controller out there, the rotaries and faders are solid and there are even XLR outputs round back.

Speaking of I/O, alongside the XLR, there's a phono out, 3.5mm and 1/4- inch headphone outs plus an aux and 1/4-inch mic input. In place of volume faders, there are two large 270o knobs with illuminated LED indicators and there's also an on-screen gain if you want some extra volume, though the app does have a gain matcher function.

A three-band EQ, loop control, effects, cues and transport make up the rest of the hardware and all of it feels very solid.

Once your iPad is in the padded slot, there's no new app to download - Djay magically transforms into the iDJ Pro-friendly GUI once it's connected. The connection is over the now-defunct 30-pin connector, which is a pity, but thanks to the socket-on-a-lead connector employed you can use a Lightning adaptor, albeit at the price of not being able to close the neat lid. Time will tell if Numark will release a Lightning connector version.

The app itself is well designed for the controller - pretty much everything you can do on the controller can also be done via touch, with a few finger-friendly additions like X/Y pad effects and a sampler, which can load in custom sounds via iTunes.

The only things you have to use the iPad for are changing the effect the knob controls and zooming in and out of waveforms, though it feels more could be done to take advantage of the iPad's hands-on ethos rather than simply replicating functions.

The hardware does a good job of accessing some less apparent features like quickly halving and doubling loops and stutter rolls that work in slip mode. There are three potential hot cues per track - simply pressing buttons 1, 2 or 3 will create them, shift-pressing will delete them.

The iDJ Pro does everything it should and it does it well. It feels solid, it's well laid out and packs a lot of features while maintaining a logical and intuitive interface.

Is this for the club? No. But as an entry-level point to pro DJing practice or for the ultimate house party solution, it's up there with the best.

It's niche, but priced well and Numark's high-quality components mean you'll be comfortable and confident with higher-end equipment when you move to the booth.